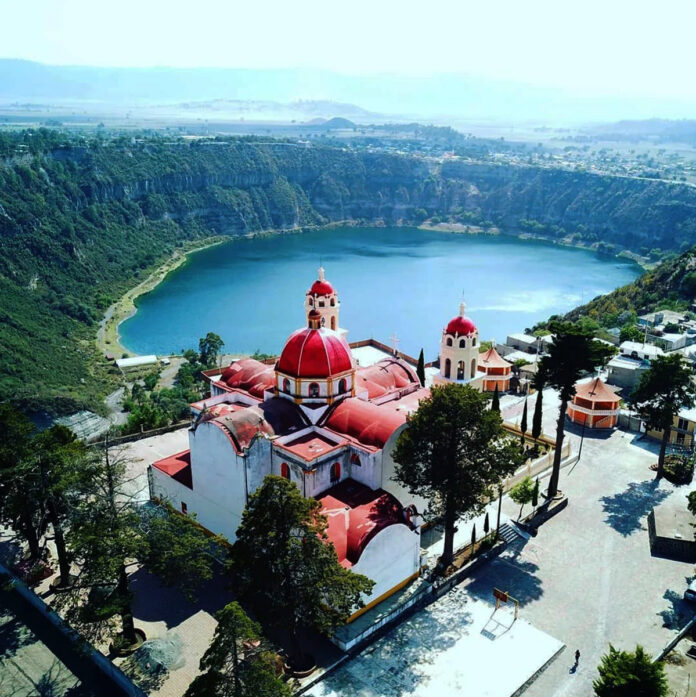 Yes, Maar in Puebla! And no, it’s not a spelling mistake. Here we tell you about this phenomenon of nature.

Yes, Maar in Puebla! And no, it’s not a spelling mistake. Here we tell you about this phenomenon of nature.

Aljojuca is a municipality in the state of Puebla and is located between the towns of El Seco and Ciudad Serdán. It is 1 hour, 45 minutes away from the city of Puebla and 3 hours and a half away from Mexico City.

Aljojuca comes from the Nahuatlatl, which means water and a derived word that is xoxohuqui, which translates as color of the sky. The particle can, is a preposition of the Spanish “en”. Therefore, it is translated as “in the sky blue”.

During pre-Hispanic times, the Nahuas settled in that area, and, to this day, they remain there. People name the area of the water crater in Nahuatl as axalapascos. In the cold season, its blue waters change color to green, due to the combination of minerals and sulfur.

Here we explain the reason for this name, which is not a misspelling. A wide and low volcanic crater is designated a maar, which is formed by a phreatic-magmatic eruption. This translates as an explosion caused by the contact of groundwater and the high temperature of lava or magma that also runs below.

The term “maar” comes from the Eifel, a volcanic region in western Germany. It refers to the lakes that occupy craters of ancient volcanoes. In Mexico, one of the largest maar is found in the Pinacate Reserve in Sonora.

Regularly these craters end up filling with water and end them up as a lagoon or lake and permits the origin to the aquatic fauna that is used by the people in the locality.

Listen to the legend told by the villagers of the girl who became a mermaid. She tells herself that in order not to be alone, she attracts men who eventually end up drowning.

In this case, the town of Aljojuca is located in the upper part very close to the lagoon, so we can say that this place has one of the best views in the region, because in the distance the Citlaltépetl also accompanies them, in the National Park Pico de Orizaba.

The main architectural monument is the church of the Parish, built in the 16th century. As well as the Calvario church, whose construction was completed at the beginning of the 19th century where oil paintings dating from 1907 and still remain in there.