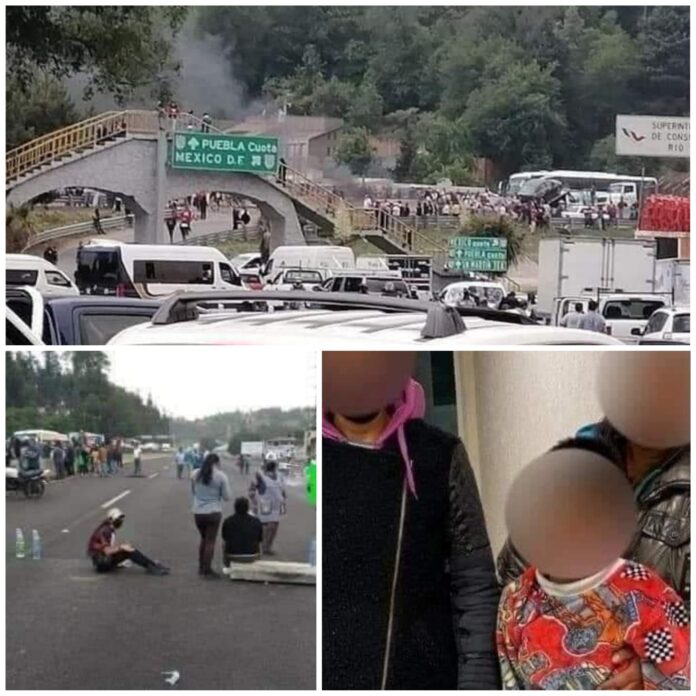 Edward de Jesús was extracted from the town of Río Frío de Juárez, in the central State of Mexico, aboard a gray car. A group of 500 neighbors decided to block one of the most important roads in the country, a measure that has become more frequent to pressure the authorities to solve cases like this.

A 10-year-old boy who disappeared last Thursday in a town in central Mexico was located after a mega-operation after his neighbors pressured the authorities by taking over one of the most important highways in the country for 12 hours.

The seizure of roads to pressure the authorities to act in a particular case has been replicated in recent months in different parts of Mexico.

It was around noon on Thursday when residents of the town of Río Frío de Juárez, municipality of Ixtapaluca, in the central State of Mexico, reported the disappearance of the minor identified as Edward de Jesús aboard a gray vehicle in the center of the community.

Image of the highway division of the National Guard of Mexico in which the seizure of the Mexico-Puebla highway is observed for the theft of a minor under 10 years of age on May 5, 2022.Credit: Mexican National Guard.

Hours later, a large group of inhabitants of the town, near the Mexico-Puebla highway, decided to take the road that connects the eastern part of the country, the Gulf area, with the capital by land.

During the course of the afternoon, the crowd also set fire to tires and shouted slogans to pressure the authorities to launch the search for the minor. At the time, the cars that traveled along the road began to concentrate until it became a kind of parking lot that exceeded 42 miles in length.

They search for the missing boy by air

It was around 4:00 p.m. when the authorities of the states of Mexico, Hidalgo, Puebla, Mexico City, and federal authorities began an intense search by air to try to locate the sedan car.

According to a bulletin issued by the Secretariat for Citizen Security and Protection (SSPC), at 4:30 p.m. on Thursday, with the support of a National Guard helicopter, “reconnaissance flights were carried out on the outskirts of the area to locate the vehicle involved in the abduction of the minor.

Almost two hours after the operation began, at 6:00 p.m., the gray vehicle was located by air entering Mexico City. The police deployed a special monitoring operation that lasted several hours and installed a special checkpoint.

Locate and arrest the abductor

At 11:00 p.m., those in charge of the operation located the vehicle, and agents from the prosecutor’s office of that state arrested a man between 40 and 45 years old, who was carrying the minor, in flagrante delicto at 01:30 a.m. Meanwhile, 99 miles from Tula, on the Mexico-Puebla highway, the despair of motorists who had been parked since 2:00 p.m. was growing.

A Twitter user named Azael Melendez wrote at 11:46 p.m. on May 5 on his account: “I need help, I have been stuck since 2:00 p.m. on the Mexico Puebla highway, I am insulin-dependent and my glucose is already at 45 mg/ dl and there is no food to buy here.”

It was minutes before 02:00 on May 6, 12 hours after the highway was taken, when the authorities reported that the minor had been located and traffic had been restored on the federal highway.

Just last April 6, a mother took over one of the most important viaducts that connect the State of Mexico with the capital as a protest against the inaction of local authorities after the death of her 15-year-old son at a party.

Two days later, on April 8, ‘Mauricio N’, the alleged murderer of Carbajal, turned himself in to the authorities of the State of Mexico and was linked to a trial for alleged qualified homicide, for which a control judge ordered him to be detained informally.