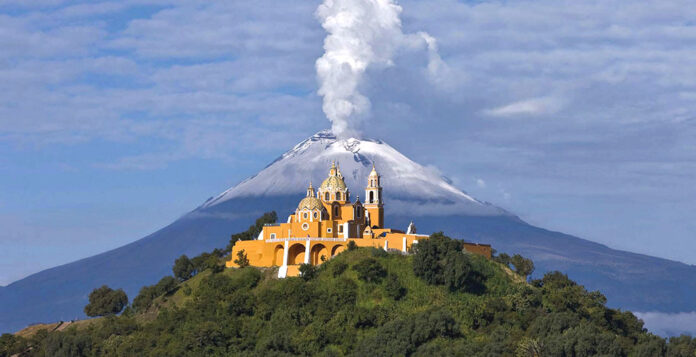 This town’s foundations are deeply spiritual.

It used to be the home of a large pre-Hispanic civilization with strong religious beliefs, but during the Spanish conquest of the Aztec Empire, many of their temples were replaced with new Catholic ones.

Now, this small town has 37 churches, most of which are active and make their bells sound at the same time to call people to mass, a melody that characterizes this town.

One of the most important churches here is the Church of Los Remedios which stands at the very top of what used to be a pre-Hispanic pyramid.

Now, icons representing both cultures live side by side. Cholula is also a town of crafts.

The Talavera is a unique form of glazed pottery with colorful decorations — most typically in deep blue.

It can be found all around the town, from a mug you can buy as a souvenir, to a traditional accent in architecture.

The complete façade of the Temple of San Francisco Acatepec is covered in colorful Talavera tiles.