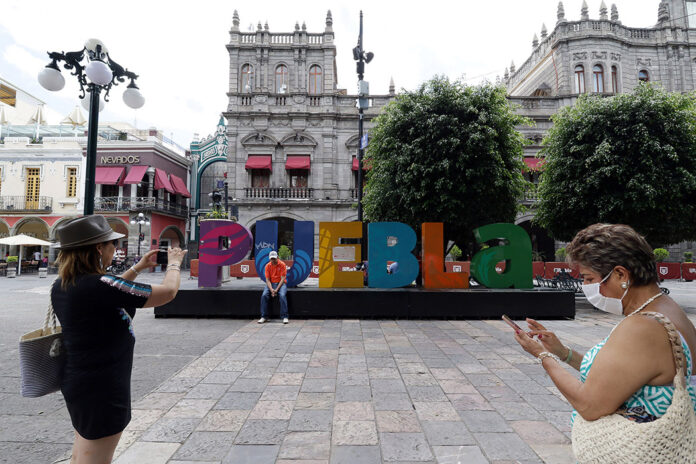 This colonial city, which sits about 85 miles southeast of Mexico City, is filled with numerous churches, but its main draws are its stunning Talavera pottery and its sweet and spicy cuisine.

Visitors must try mole poblano (made with numerous ingredients, including chiles, meat, chocolate, cinnamon, and garlic) and Chiles en Nogada (chiles stuffed with beef and served with a walnut sauce and fruit like peaches, apples, and pomegranate seeds).

When the sun sets, venture to Callejón de Los Sapos to listen to live music.

Ever wondered why Puebla is called the “city of angels”? Here is the answer: legend tells that a heavenly court was in charge of tracing its streets and placing the biggest and heaviest bell of the cathedral.

However, we believe there are other reasons to say the angels shelter it: its almost 365 Baroque domes outlining the horizon; the delirious tastes of its gastronomy, such as Mole, and Chiles en Nogada; the bright blue of its Talavera; its colonial mansions turned into museums and hotels, and on top of that, the hospitality of its people.

For these reasons and so many others, Puebla de Zaragoza is a worthy World Cultural Heritage city, which deserves to be on your Mexico touristic destinations to visit list.

The fact that the city is situated only two hours away from Mexico City, makes it one of the most recommended travel destinations in the country.