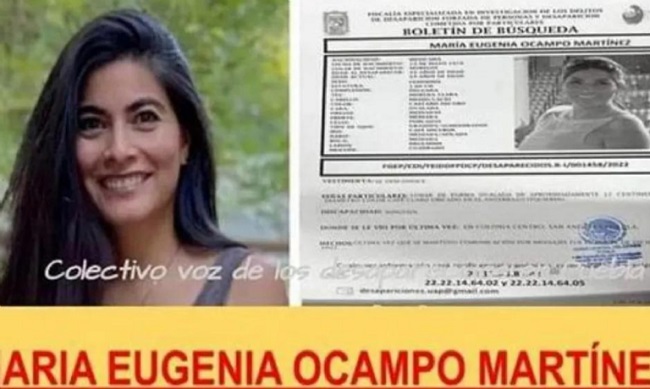 The body of a woman was found on the slopes of the La Malinche volcano in the area between the states of Tlaxcala and Puebla. The authorities reported that it could correspond to the activist  María Eugenia Ocampo, who had been reported missing in Puebla.

The discovery was made by a group of people on the night of Tuesday, January 3, in a ravine, when they were circulating in the area between the municipalities of Teolocholco and San Pablo del Monte.

The emergency team and authorities arrived on the scene and determined that the woman had no vital signs.

The authorities observed that the body found on the slopes of the La Malinche volcano bears resemblance with particular signs and clothing with the disappeared María Eugenia Ocampo, a 43-year-old psychologist, for which reason the results of the legal necropsy are awaited to determine if it is of the psychologist and if the type of injuries coincides with femicide.

Who is Maria Eugenia Ocampo?

María Eugenia Ocampo Martínez is a psychologist by profession and an activist originally from the state of Morelos, but who has lived in Puebla for a long time.

She was reported missing on December 21 in the municipality of San Andrés Cholula, in Puebla, when her relatives lost communication with her.

According to her search bulletin, in the last communication that  María Eugenia Ocampo had with her family, she indicated that she would travel to San Andrés Calpan and then to Morelos.

From that moment on, her search even began through social networks and the media, which reported the location of a body that, according to what they said, could be hers.