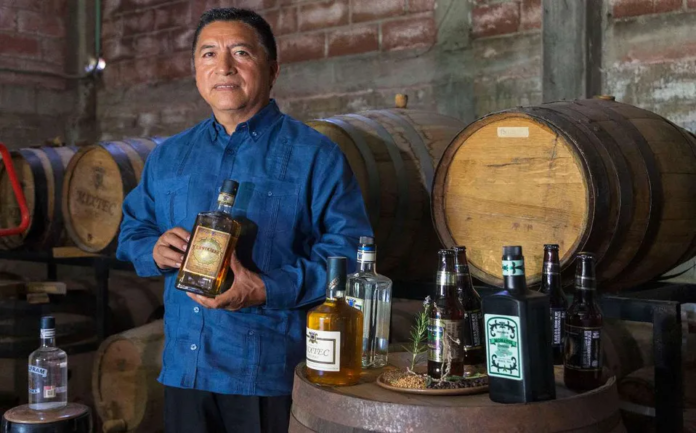 In 2014, after returning from the United States, Jesús Montiel launched the first bottle of whiskey made from Creole corn.

38 years ago, Jesús Montiel Hernández immigrated to the United States from his native Izúcar de Matamoros with the purpose of finding a better quality of life. After traveling through ten states, he arrived in New York where he learned the trade of a jeweler and, over time, found his vocation: to dedicate himself to the craftsmanship of beverages, such as whiskey, gin, vodka and beer.

After taking courses to make them, Jesús decided to return to Mexico in 2010 with the idea of ​​producing a Mexican whiskey, which he not only achieved, but can also boast of being the first in our country to be distilled from white corn.

“I was working from here to there until I found myself in the jewelry industry. I learned to work with silver, copper, bronze and became a craftsman, but over time I formed my family, my children began to grow and my activity in jewelry making also (…) until they got involved, “he said.

He indicated that at the same time that his work decreased, the instructions on how to make craft beer arrived in his email, “and that is where the story begins. It became my second passion, first metals and when I got this email it changed everything. I found an activity that started to keep me active.”

The first thing Jesús brewed was craft beer and about four months later he received an invitation to participate in a seminar in Tennessee on how whiskey is made, which he attended.

“I was fascinated by the process, but what caught my attention the most is that bourbon, which is very famous there, is made with 75 percent corn and 25 percent barley,” he explained.

From there, the idea of ​​doing something similar in Mexico was born, “because it didn’t exist. I began to investigate the origins of Scottish whiskey, then I discovered that Japan and Canada also did it (…) That’s how it became an obsession, there has to be a Mexican whiskey “.

He also added that he based his idea on the fact that in Puebla there is plenty of raw material: “Tehuacán is the cradle of corn in all of Mesoamerica, so we decided to make a Mexican whiskey that is one hundred percent corn.”

In this way he founded the Ayutla Distillery in 2011, located in the auxiliary board of the same name belonging to the municipality of Izúcar de Matamoros: “It took me approximately a year to put together all the components. In the course I took, they told me that to make a good whiskey you first have to learn how to make a good beer, which we were already doing”.

In 2014, Jesús Montiel launched the first bottle of whiskey, Cetxim, made from Creole corn, the first of its kind: “We launched it until then because it had to be aged for three years (…) at first we were not accepted and another factor against it was the price, it was expensive for them”.

Another situation against which he had to face is that, at the beginning, he wanted it to be called Mixteca, because he was originally from that area of ​​the Pueblan territory. However, there was already a registry with that name, the same thing happened with other options: “When we arrived at the IMPI (Mexican Institute of Industrial Property) many of them were already registered, so like a good foolish Mexican, we wrote it backwards and Cetxim was born there”, he said.

Montiel Hernández acknowledged that in the process he has had to rethink various aspects of promotion and marketing, such as the presentation of the product: “From criticism with the name, the bottles, the labels, we never hit it, they are always criticizing”.

However, he assured that his product has evolved and makes the necessary changes to grow; therefore, a big step was the production of aged whiskey, which takes longer to make.

It should be noted that the “Aged” version is the result of the distillate that they kept in the barrels during the two years that they had to suspend their bottling work due to the pandemic, so now the goal is to do it with blue corn to see the variation. flavor. At the same time, Jesús focuses on the production of gin, which he seeks to export to the United States, as well as craft beer.

Jesús informed that to produce the whiskey, it goes through a process of grinding the corn, then cooking, maceration; You must wait 30 days of fermentation, reach the distillation and, later, the bottling for sale.

He stressed that although the excess of heat, characteristic of the municipality, is a factor that affects liquors because it disturbs bacteria, he built controlled temperature chambers, already in his aging in white oak barrels it was favorable.

“In the production of whiskey, from the base, it is a problem, already in the barrel it is another factor, first because the wood is already burned and during the day the heat causes the barrels to absorb the alcohol and at night it is removed. it comes back, that’s how it is every day, that’s when it carries the flavors and aromas of the wood”.

He stressed that the hot and dry climate of his terroir has been favorable for the aging process, since it helps to obtain a unique flavor for the nearly 300 bottles that they had been producing each month until before the start of the pandemic.

Similarly, Jesús suspended visits to the distillery where tastings of his products are carried out: “We are reactivating ourselves. The first strongest activation was the invitation they gave us to the Puebla Fair, where we had a very favorable acceptance and broke our sales records. We sold about 160 beers the first day and the next day we doubled it,” he said.

The owner of the Ayutla distillery estimated that during the fair he managed to place an average of 300 beers each day, in addition to establishing contacts that have acquired his production:

“We created our own point of sale on the Matamoros-Atencingo highway, kilometer two, where the El Bateador restaurant is located (the name given to one of the versions of their craft beers, by the way),” said the producer from Puebla.

The liquor artisan pointed out that this was the first beer he produced in Mexico and from there five other options emerged: Bateador Porter, Bateador La Colorada, Bateador Herbal, Bateador Chocolate Stout and Bateador Damiana.

“In the last two years, due to the pandemic, we have focused a little more on these products and we have only bottled whiskey twice, each of 300 bottles, because we do not know in what period they are going to move to decide to do more” , revealed.

He indicated that he not only produces whiskey since he also ventured to produce a gin with juniper as the main ingredient since it is abundant in the La Malinche area.

He stressed that a plant called Damiana is also used for the production of gin, “which is invigorating and I have always said that everyone uses energy as they wish,” he joked.

In project, Jesús has contemplated the elaboration of other drinks, the same ones that already fulfilled the previous essays: “Only the labels are missing so that we can present them”, he warned.

Whiskey is an alcoholic beverage that, according to some authors, its meaning is “water of life”, and is the result of the fermentation of cereals such as barley, wheat, corn or rye, to which malt and beer are added.

Montiel Hernández suggested that the tasting of the whiskey should be in small sips, keep it on the palate for a few seconds and then drink it, so that the palate allows one to identify the entire bouquet and the woody aromas that are obtained for three years in the oak barrels.

To learn how Cetxim whiskey is made or participate in the tastings, you can make an appointment through the page www.destileriaayutla.com.mx or on your Facebook account: destileria.ayutla.