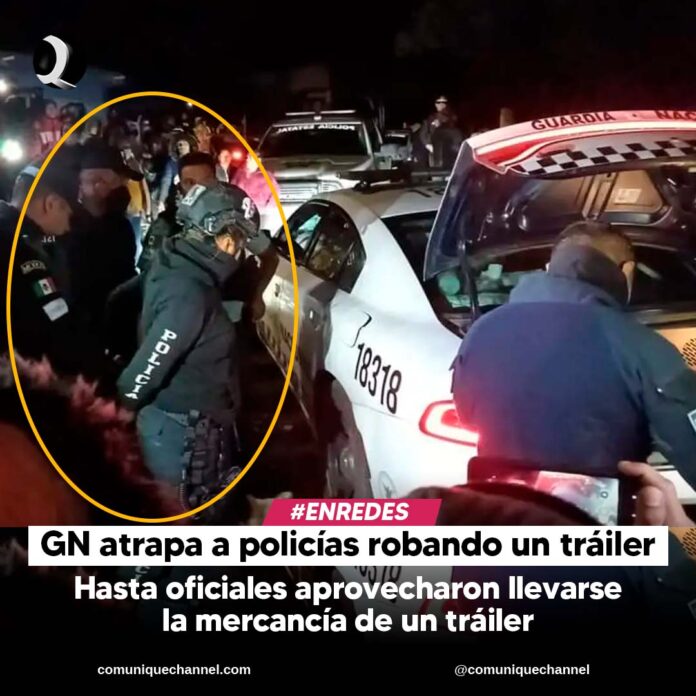 State police officers from Puebla and Veracruz were arrested in this municipality when, presumably, they were preparing to steal merchandise that they stole from a dry box, corresponding to a cargo vehicle. The uniformed men had, at least, a patrol from Puebla loaded with that product, an action that they could not justify before the National Guard, for which they were insured and made available to the State Attorney General’s Office ( FGE ).

On Tuesday night, residents of the municipality were alerted about the suspicious presence of the state police, who were unloading merchandise from a truck and transferring the boxes to their patrol cars.

Agents of the National Guard, as well as officers of the Esperanza preventive police, arrived at the place where six state police officers from Puebla and three from Veracruz were, who indeed had some of their units loaded with merchandise in closed boxes.

In a matter of minutes, dozens of residents of the area gathered at the site, who, realizing the facts, demanded that the National Guard arrest these uniformed officers, considering that they had committed an unacceptable act, because far from caring for the population, they are dedicated to pillage.

The policemen caught in such action could not justify the reasons why the cargo of the transport vehicle was in their patrols, nor the reason why the Veracruz officers were in Pueblan territory. Given these facts, the National Guard proceeded to arrest them and confiscate both the merchandise and the patrols.

They were transferred to the FGE, where they were made available to the ministerial authorities who will be the ones to define their legal situation. It is unknown if there is any complaint against them by the person or company that owns the affected unit.

This is not the first time that state police have been involved in irregular acts, in mid-August, a family from Azumbilla, Nicolás Bravo, went to the public ministry agency to denounce elements of that corporation for attempted homicide, blows and threats, among other crimes.

According to the version of the people, more than 30 uniformed men broke into their property, for which they were asked the reason for their presence before which they immediately began to beat a woman, the family of the attacked intervened and the officers dealt blows to everyone. They even got to activate their firearms.

Governor Miguel Barbosa Huerta said that if those police officers are “thieves” fire them, because his administration will not cover up “a stupidity of that nature.”

When reviewing the data of the cargo trailer, they confirmed a few hours earlier that it had been reported stolen when it was driving on the Puebla-Córdoba highway, so they immediately arrested the uniformed officers, who turned out to be six from Puebla and three from the same Veracruz corporation.

In a statement, the Secretary of State Security reported that the elements were administratively suspended while the legal procedure against them is carried out, while offering that this unit will collaborate with the authorities to clarify the case.

The SSP does not tolerate criminal acts or corruption, on the contrary, it rigorously punishes them, for which it reiterates to the population that the isolated act of said uniformed officers does not represent the values ​​that govern this institution,” he said.

It should be noted that this is not the first time that elements of the Puebla police have been arrested for participating in illegal acts.

According to a count made by the newspaper El Sol de Puebla, until August of this year, in 2022, 44 state and municipal police officers had been arrested for committing various crimes, including torture, fuel theft, homicide, sexual abuse or links with The organized crime.

In May, nine state police officers were arrested for participating in an ambush against members of the Unidad por Coyomeapan movement, in which three people were murdered, one of them a minor. So far the intellectual author of this crime has not been located.