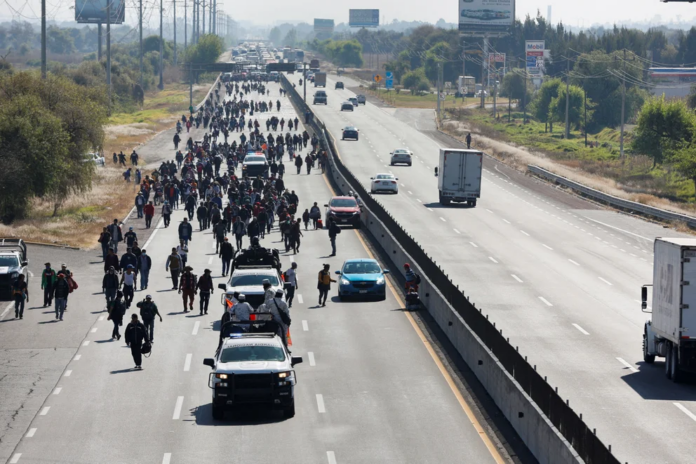 Migrants advance to Mexico City with a group of pilgrims

After spending a day in San Miguel Xoxtla, Puebla, the migrants continued their journey to Mexico City, which began on October 23 in Tapachula, Chiapas, for which they headed to the Mexico-Puebla highway to board trucks. and cargo vehicles, in which they traveled a section of the highway, but shortly after starting their journey, they were lowered from the units by elements of the National Guard (GN) at the height of the Huejotzingo and Santa Ana Xalmimilulco municipalities.

In response to the actions of the security elements, the migrants closed the circulation of vehicles that traveled in both directions, as they retreated to the San Martín Texmelucan booth to block the passage of cars.

As reported by witnesses, a driver gave a thousand pesos to one of the migrants who were blocking the road, for which they gave way to free a lane towards Mexico City, as the people who continued their journey to Mexico City occupied three lanes of the highway.

Subsequently, the elements of the National Guard released the direction of movement towards Puebla. Although the migrants tried to board trucks and freight vehicles again, the GN prevented their success, arguing that if they traveled in this way, they could fall or be injured.

The leader of the Pueblos Unidos Migrantes organization, Irineo Mujica, reported that the caravan was made up of around 400 people from the Central American countries of El Salvador, Nicaragua, Honduras, and the Caribbean territory of Haiti; who joined a group of pilgrims who are destined for the Basilica of Guadalupe in the north of Mexico City.

“This is a peaceful caravan and we are so close to arriving that staining it with an incident would be problematic, ” commented Irineo Mujica, who also assured that the Puebla authorities gave them dignified treatment during their passage through the entity.

Personnel from the National Institute of Migration ( INM ) and the National Human Rights Commission ( CNDH ), who took care of the migrants from possible abuses to which they are vulnerable by security elements, as the police escorted them during their way on the highway.

The members of the migrant caravan spent the night in Puebla (Photo: Cuartoscuro)

123,000 migrants have requested asylum in Mexico so far in 2021, a figure that reflects the migratory crisis that is being experienced in the country, since in previous years there were around 40,000 people who tried to take refuge in the national territory, a number which today is tripled.

Various caravans of migrants have departed from southern Mexico, most of their members seek to reach the north of the territory to cross to the United States and try to obtain an improvement in their living conditions.

The Mexican authorities have been criticized for the various incidents that have occurred with migrants, as the United Nations (UN) recently called for a change in the measures that the security forces maintain to maintain order for these travelers in the country.

The United States has implemented the “ Stay in Mexico ” program, which obliges migrants who request to enter that country as refugees to wait in national territory, for which Human Rights Watch has warned that thousands of applicants are at risk. , as they are prone to being victims of kidnapping, extortion and rape.