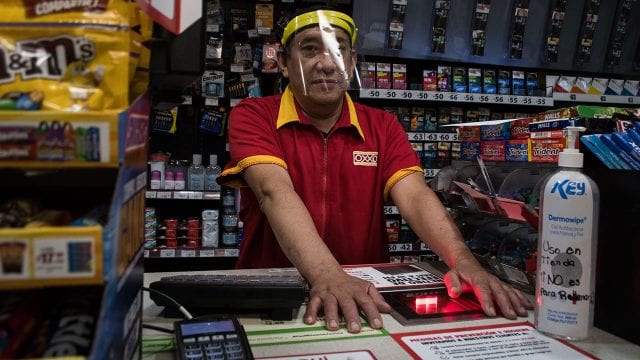 Data from the National Banking and Securities Commission (CNBV) indicate that in the country until last August there were 66,671 ATMs.

The chain of convenience stores Oxxo added another bank to which it will allow its customers to make cash withdrawals in its more than 19,000 branches, Santander is the ninth institution with this service.

According to the retailer’s Director of Services, Santiago Rivera, with this alliance, they contribute to generating a positive economic and social impact by strengthening financial inclusion in Mexico.

“We are aware that a part of our stores are located in locations where it is difficult to have access to financial services, so today we add one more proposal, such as the provision of cash for Santander cardholders,” he said.

In turn, the bank’s Executive Director of Network Operation, Ernesto Higuera, pointed out that with this agreement they expand their current offer of 1,352 branches and offices, as well as 9,534 ATMs located throughout the country, seeking to bring banking services closer together. and thereby support financial inclusion.

And it is that Santander customers will be able to make cash withdrawals in these establishments from 06:00 in the morning to 10:00 at night, 365 days a year, including Sundays and holidays.

The maximum amount per disposal will be 2,000 pesos per transaction, which will be subject to the availability of cash in each box, while the cost per operation will be 15 pesos, with VAT included.

Data from the National Banking and Securities Commission (CNBV) indicate that in the country until last August there were 66,671 ATMs, of which 13,091 belonged to BBVA Mexico, while Santander had 9,557, Banorte with 9,556, Citibanamex with 9,063 and HSBC with 6,085

According to the CNBV, Oxxo is the main banking correspondent in the country, since of the 43,397 points to make payments or transfers in operation at the end of 2019, the chain represented 43% by adding 20,962.

In the study “Annual Financial Inclusion Outlook 2020”, the CNBV indicated that the Yastás network of Compartamos Banco is in second place, with 8,289 points, equivalent to 17%, and in third place Walmart, with 3,005 correspondents and 6% of the total market.

Farmacias Guadalajara ranked fourth, with 2,241 points or 5%, and the convenience store chain 7 Eleven ranked fifth, with 2,229 correspondents or 5%.