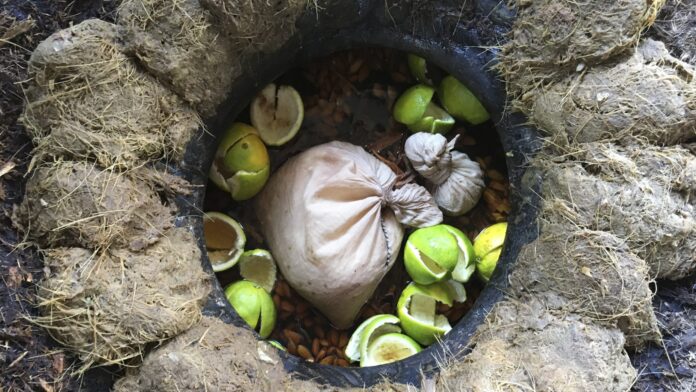 Mezcal de pechuga is a spirit drink with more than 400 years of cultural heritage that is still present on the tables during the celebrations.

Mezcal, like many alcoholic beverages, was born between the ceremony and the party. It has been used as a remedy for rubbing and cleaning, for stomachaches, to bless projects and celebrate important moments, such as mayordomías or weddings. From a few years to now, this drink has not only become more known but has also been democratized and revalued.

The mezcal de pechuga is particularly important in celebrations and hides a very special ritual halo. There are some mezcaleros, like Jesús Espina from Archivo Maguey in Oaxaca, who refer to him as ceremonial.

“They are mezcals that have an intention with human energy, for example sharing a baptism, having faith in a saint, honoring the dead, celebrating patron saint festivities, weddings or any special occasion. They are recipes so contextual that they are unique ”.

For some people it is not just a drink, “it is our best mezcal. Every time we have a special celebration we make breast mezcal, in our town it has been done for more than 400 years, it has a different historical and cultural value ”, confirms Moisés Martínez, mezcal promoter, president and legal representative of the group in Santa Catarina Minas —Cuna of the mining mezcal in Ocotlán—, in Oaxaca. His family has three generations of mezcal tradition.

How do you make breast mezcal?

Normally this mezcal is made at the end of the year, during the Day of the Dead season because of the ripe and abundant fruits that can be found. To make it, you must first choose the animal breast to be used. In this election, opinions are divided. Some say that can only be done with birds such as Graciela Angeles, producer of mezcal Real Minero de Santa Catarina Minas, Oaxaca: “The mezcales breast with venison, rabbit, sheep or any other animal other than a bird, not they can considered as such because they break tradition ”. Lala Noguera says that “it can be a duck, a goose, an iguana, a hen, a turkey, a deer or a wild boar, according to the state of the Republic where it is made.”

Joel Real, palenquero of Don Tacho and Mezcal Miter defends: “preferably that all are from ranch chickens or wild animals, such as rabbit, deer or quail, but fed without hormones so that it is not greasy”.

Most producers opt for an old hen due to the toughness of the meat. These animals are raised in the homes of the mezcaleros, when they are artisanal productions, or bought from trusted organic producers – as in the case of Los Danzantes, one of the best-known brands of breast mezcal.

Regarding the type of maguey that is used, there is no rule written in stone, the most used is the espadin for the flavor, the years it takes to grow and the liters of alcohol that the plant gives, although in some places in Santa Catarina Minas now they are experimenting with tobaziche, arroqueño, tobalá and cuishe, according to Moisés Martínez. The choice of the maguey depends on the mezcalero master.

The first steps in the breast mezcal process are the same as in other mezcals: the pineapples are cut at mature age or capon —before the flower comes out—, the maguey leaves are peeled and the hearts are cooked in an oven. conical on the floor, for about eight days. Finally, they are ground in a bakery or crushed with mallets to extract the honey and bagasse.

Fermentation takes place in a wooden vat and is distilled twice in copper stills or clay pots, to then move on to the key point: the third distillation. This is the moment in which the clean breast (without blood or entrails) is hung with a hemp rope inside the alembic so that the steam cooks and slowly dissolves the skin thanks to the exposure of the heat. According to Jesús Espina, the breast serves as a retardant to retain steam and generate more alcohol content. It enhances the flavors, adds fats and aromatic notes, but it is worth mentioning that it does not leave a taste of chicken, turkey or any other animal that has been used.

Each mezcalero master has his own recipe to give the drink flavor and aroma. The choice of breast filling ranges from fruits such as guava, orange and lemon to dehydrated fruit, marijuana, and there are even those who add the ingredients of a mole.

In the recipe for Santa Catarina Minas de Graciela Ángeles use chicken breast; in Matatlán, they put turkey breast. Inside it has pineapple, apple and Creole orange, plantain from Castilla, raisins, apricots, almonds, rice, anise and cinnamon. In Puebla, Relámpago Mixteco has a variety of breast mezcal with mole from Augurio restaurant, by chef Ángel Vázquez, which is produced using different traditional poblano moles and has notes of sesame, very light chocolate, citrus and smoked.

“In Puebla they make one of turkey muddy with mole poblano, this will taste like mezcal with notes of spices, chocolate, chili peppers and animal meat. There are others who make it with green mole or only with native fruits ”.

Lala Noguera, promoter of mezcal and other national distillates

Once the third distillation is finished and the breast mezcal is obtained, what is left of the fruits can be used for cooking. In Tlacolula they have been used to stuff a suckling pig, in Santa Catarina de Minas, to make jams. The breast cannot be reused because it remains without essence and is wasted by the vapors, normally they give it to dogs.

How do you drink this mezcal?

The flavor of breast mezcal is always different, it has a lot to do with the fruits that have been used. It is best to take it just to appreciate the fruity notes and smoky flavor of the maguey. According to Espina, it can be paired with the traditional food of the mayordomías, such as chicken mixiotes, black or Matuma mole and tamales; According to Joel Real, in the Valley of Oaxaca it is eaten with barbecue or segueza, which is a stew of broken corn. As a digestive it can be accompanied with a dessert, such as strawberry pie or with pieces of chocolate.

It is not a product designed for cocktails; however, for the tones and flavors it has, it has worked well. According to Víctor Pérez, Marketing and Export Manager at Los Danzantes, some bartenders use it for its reddish hue and sweet flavor.

Where to take mezcal de pechuga?