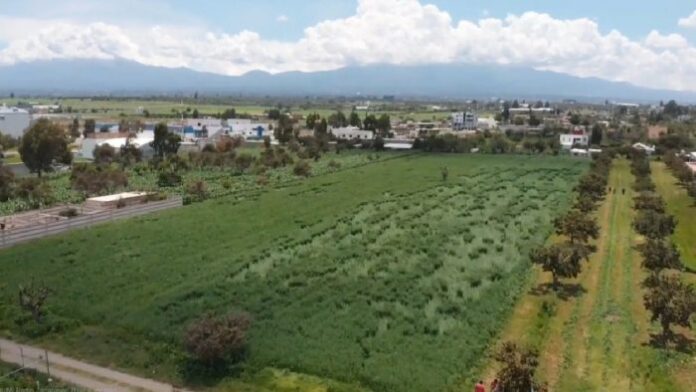 A crop circle, crop formation, or corn circle is a pattern created by flattening a crop, usually a cereal.

The term was first coined in the early 1980s by Colin Andrews. Crop circles have been described as all falling “within the range of the sort of thing done in hoaxes” by Taner Edis, professor of physics at Truman State University.

Although obscure natural causes or alien origins of crop circles are suggested by fringe theorists, there is no scientific evidence for such explanations, and all crop circles are consistent with human activity.

And on Monday, July 19th, near the sinkhole of Puebla, in the municipality of Huejotzingo, strange figures appeared in a barley field, that resemble the famous “Crop Circles” in England.

From an aerial view, you can see the irregular lines on the surface of the terrain, which is about 300 meters long by 50 meters wide.

Residents of the area said that last Monday, July 19th, they heard a noise as if a plane was passing by, but they did not see the aircraft. Besides, the Puebla Airport is located at least one kilometer away from the area of ​​the field where the strange figures appeared.

“Around one in the morning we heard a lOud noise, like a plane passing by; that was how it was heard, but the sound stopped suddenly. Later, in the morning we got up, we went to see if there were any signs of the strange noise; and that was when we saw that the barley was all cut into parts. There are some circles, but they left others intact; we don’t know what it was. If it had been a whirlpool, it would have taken everything, but in this case there are only parts where the barley was flat”.

Concerned, residents near the sinkhole and the fields requested the intervention of the authorities.

Civil Protection personnel from Puebla approached the area where the strange figures appeared, but they were threatened by the owners of the property, who did not allow access to the area, since they do not want crowds of tourists invading their property, as it happening in the Santa María, Zacatepec sinkhole.

The relatives of the owner of the plantation assure that the strange figures are the product of the gale and the rain that has prevailed in the state of Puebla; however, in the last hours, no rain was registered in the place.

“We are not interested in curious people coming to see what happened here. Nothing has happened but a very strong gale and constant rain for more than three hours ”.

Family member of the owner of the plantation in Puebla

The owner of the land where the field with the strange figures has even threatened to shoot any other person who approaches.

This field with the strange figures is located one kilometer away from the gigantic sinkhole of Santa María Zacatepec, Puebla.