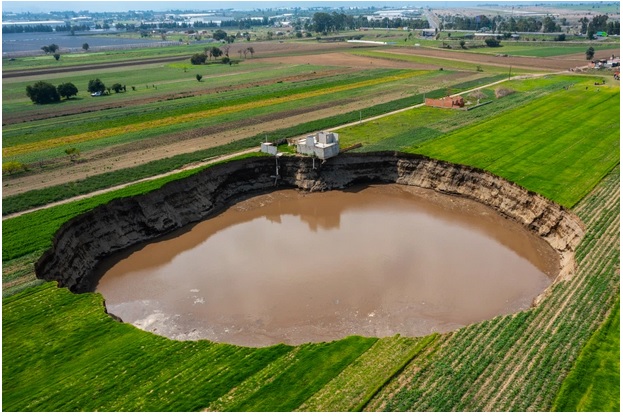 Santa María Zacatepec, Puebla — The government of Mexico has declared that the massive sinkhole that suddenly appeared on a farm in the state of Puebla is of natural causes.

The government’s National Water Commission (Conagua) says after testing, they have concluded the hole to be natural and not due to the over-exploitation of the underground aquifer.

In their report, the Comisión Nacional del Agua (Conagua) says that in its technical opinion on the geohydrological conditions in the area of the sinkhole in Santa María Zacatepec, the information available indicates that the possible cause is a natural process of dissolution of calcareous rocks.

They said that there are elements that suggest the process of the formation of caves or sinkholes is due to a natural wear and tear of dissolution of calcareous rocks and which can eventually naturally collapse.

In the area of the sinkhole, the groundwater has a higher temperature than in the rest of the aquifer, which suggests the rise of the deep waters toward the upper aquifer. Conagua pointed out that recently, the height reached by the liquid was measured, the piezometric levels, which remain stable or even higher than in other measurements.

“The foregoing indicates that there is no evidence of abatement of the aquifer, that is, there are no elements to establish a causal relationship of the sinking phenomenon from the process of variation in levels of the aquifer,” said the Commission.

Based on aquifer studies from 2020, the Puebla Valley aquifer still has availability.

“It is concluded that the aquifer is not in a condition of over-exploitation, much less that this could be the cause of the geological accident of the sinkhole,” said the agency who added a recommendation that studies on the sinkhole, initiated by different federal and state agencies, focus on the deeper geological and tectonic analysis of the area.

At the end of May, a sinkhole began to form in the backyard farmland of a private home in Puebla. Within 24 hours, the hole grew to an impressive 70-meters across. By the first week of June, the hole reached nearly 100 meters, taking out a section of the home’s fence, which caused the family’s evacuation.

The hole has remained this size with officials saying it has reached a growth of nearly 100 meters across and 15 meters deep. There was concern that the collapse was due to the over-extraction of underground water by local water companies, however, Conagua says the collapse of the ground and the creation of the sinkhole is of natural causes.