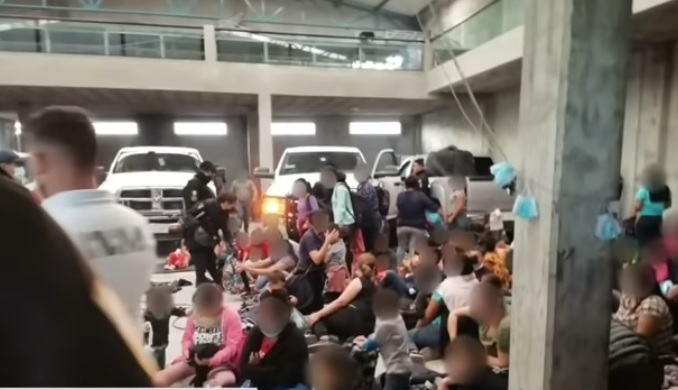 From June to date, a total of 483 migrants have been rescued in the state of Puebla.

Through a prevention operation against human trafficking, agents of the State Public Security Secretariat and personnel of the National Migration Institute (INM), managed to find and safeguard a total of 186 migrants from Central America who were temporarily detained in a building in San Sebastián de Aparicio.

In addition to the foreigners, six alleged Polleros were located, who would have charged in advance a certain amount of money to monitor, feed, and transport the Central Americans heading north.

The detainees identified themselves as Luis Antonio G., alias “El Flaco” and Inocencio T., originally from Guanajuato; Fernando R., a native of San Luis Potosí; José Alejandro C., from Chiapas; Jehosafat R. “El Josi” and Víctor Hugo H. “El Pechugas”, from the city of Puebla. They were transporting the immigrants in seven vehicles which were placed at the disposal of the ministerial authorities.

The now detained had in their possession five vans and two sedan-type cars, which were allegedly used in the illegal activity of transferring migrants without documentation.

Therefore, the group of people was transferred to the facilities of the National Institute of Migration, where their legal situation in the country will be resolved.

It should be noted that from June to date, a total of 483 migrants have been rescued in Puebla, 461 of them from Central American countries and 22 from Bangladesh.

The six Polleros who were arrested in San Sebastián de Aparicio have criminal records for drug dealing or homicide, revealed the governor of Puebla, Miguel Barbosa Huerta.