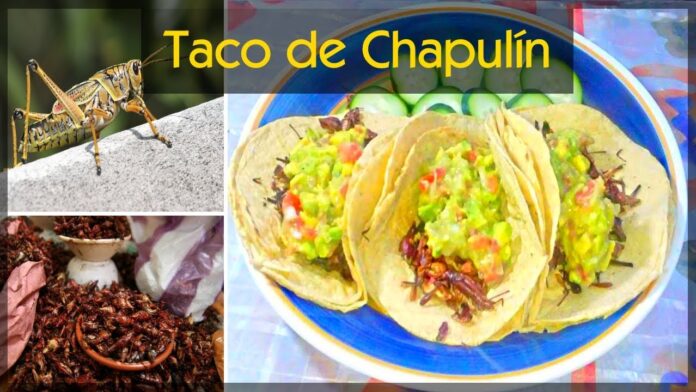 For Puebla producers, the sound and pronunciation of this Nahuatl word is as special as its flavor and that is why they include it in more and more dishes.

With cinnamon tape, Doña Esther seals the sacks of grasshoppers that will be sent from the community of Santa María Zacatepec, Puebla, to the state of Jalisco. The rest of the workers do the same to expedite the shipment that will arrive in a couple of days to the markets and restaurants in that state. Weeks before, a shipment was also made to Oaxaca, one of the main points of commercialization of this product.

For Doña Esther’s family, the grasshopper is a blessing. With their hunting and distribution, they have managed to get hold of their goods and keep the region’s economy active, which, for years, had brick production as its main activity and which, over the years, remained in the background, to be this edible insect the main source of income.

Petra Morales, 85 years old and Esther’s mother-in-law, recalls that, together with her deceased husband, they started this activity 50 years ago which, curiously, at first generated a bit of shame for some of the inhabitants, as this meant hunting the plague of the cornfields.

“One afternoon my sister-in-law invited me to gather grasshopper and I remember I said to her ‘oh no, what a shame, because at that time we were dedicated to the partition wall, but she insisted and we went with the sacks to the field. The grasshopper has given us little money, hence I bought my truck and my children have also made their things, “he shared.

Without knowing it, that day became the beginning of a commercial activity in which three generations of the Morales currently participate, and in which more than 200 families from this small region have seen their economic support. Without giving figures, he recognizes that the amount of grasshopper they sell is very significant, being Oaxaca its main destination, in addition to the city of Passaic, in New Jersey, United States, where there are a significant number of nationals from Puebla.

Although due to her age, Doña Petra is no longer dedicated to harvesting, she emotionally remembers the beginnings of this activity, in which they even transported grasshoppers by train.

Esther shares that those who are dedicated to this activity in Santa María Zacatepec, prefer to go unnoticed, because, in recent years, they have been victims of crime due to the great demand for this product that is now considered an exotic and gourmet dish.

Producers recognize that the sound and pronunciation of this Nahuatl word is as special as its taste. According to the etymology, the word chapulín comes from chapōlin, formed of sheet metal (to bounce) and ulli (rubber or rubber), in relation to the ability of this insect to jump from one side to the other. And so, alluding to its name, it has managed to move from one dish to another, acquiring versatility in its incorporation into sauces, soups, tacos, snacks, stews, and even pizzas.

Isidro Navarro Ortega, manager of the Mesón Garibaldi Poblano restaurant, shared that precisely one of the favorite dishes of the house is the “Azteca Plate”, an appetizer that features the grasshoppers of Zacatepec, which are accompanied by mole, huitlacoche, and maguey worms.

This mixture of flavors has captivated the palate of locals and foreigners who seek to enter new gastronomic experiences with ingredients from the region. “This dish is an explosion of very interesting flavors. We buy the grasshopper with the producers of Zacatepec, which has a very characteristic flavor, between salty, sweet, crunchy, and lemon juice, it gives it a very special citrus touch ”, he shared. In this restaurant located in a tourist area of ​​the municipality of San Pedro Cholula, visitors also enjoy guacamole mounted on the traditional molcajete and accompanied by a good portion of these critters.

“The grasshopper is becoming more and more known. This makes the diner feel attracted and is not afraid to eat it. When seeing it combined with these dishes, foreigners request them, but especially guacamole, which although it is a fruit, when combined with salty, lemon and the flavor of grasshopper, it becomes a perfect combination for the palate, “he said.

Navarro Ortega explained that Aurelio Popoca Gerónimo, director of the restaurant project, had the premise of extolling the flavors of the region, so added to these dishes, they always have an ace up their sleeve to surprise their guests with a very similar snack. Poblano: the chalupines, chalupas accompanied by the main ingredient.

Itzel Canizal, the owner of the restaurant bar ” El Nahual “, includes in her menu a pizza with grasshoppers, which has conquered the palate of her customers “For us, including a Mexican food, pre-Hispanic and that has even been discriminated many times, is a great pride, because when people know it, they accept it and appropriate it, to the point of turning it into a gourmet experience.”

In addition to describing this proposal as delicious, innovative and fun, Itzel recognizes the nutritional properties that this dish offers. ” The grasshopper is a food rich in protein and a great advantage is that the food allows you to mix many cultures, traditions, ingredients and flavors, which together will offer you a unique and different culinary experience,” she said.

Together with the gastronomic varieties, the nutritional value has been another point in its favor so that it has more and more relevance in the incorporation of new dishes. Even the United Nations Food Organization (FAO), considers that by 2050 insects such as grasshoppers, worms and ants will be a fundamental part of children’s diet due to their high protein value.

For her part, the doctor, Diana Morales Koelliker, director of the Faculty of Nutrition of the Popular Autonomous University of Puebla (UPAEP), highlighted that one of the main benefits of this insect is that 75 percent of its composition has fiber, making it in a food with great nutritional value. She said that although due to its texture and flavor, not everyone dares to try it immediately, thanks to the incorporation that has been made in different dishes, people dare to taste it with greater courage.

She even recalled that, since pre-Hispanic times, entomophagy (feeding based on insects) is not a new phenomenon. Archaeological evidence indicates that this practice dates back to the most ancient times, and there is even anthropological evidence that shows the importance that insects had in the diets of our ancestors, where they were only intended for people of higher rank of the tribes.