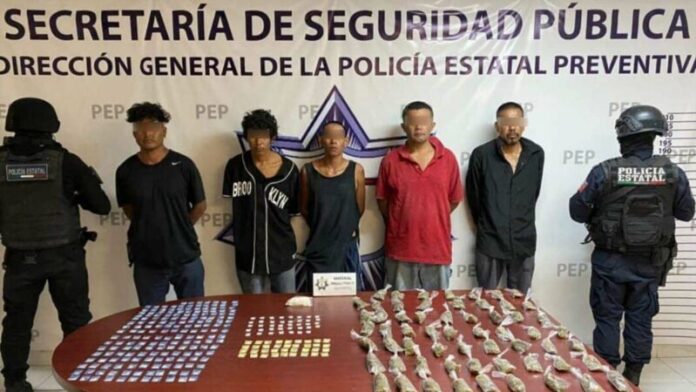 In Puebla, 6 members of the “Reds” are arrested with drugs.

In Puebla, in two different actions, they arrested six alleged members of the criminal cell known as the ” Rojos “, responsible for various acts of violence in the region, and linked to high-impact crimes such as kidnapping, vehicle theft, and extortion.

How were the members of the “Rojos” arrested in Puebla?

After his arrest, he was seized 60 grams of a granulated substance with the characteristics of glass and a pickup truck.

The second arrest made in Chiautla de Tapia resulted in the arrest of Víctor P., Víctor Manuel M., Jesús B., Paulino P., and Ángel H., who were in possession of 256 doses of apparent glass and 60 wrappers with green grass with characteristics of marijuana.

Who are the “Rojos”?

The criminal group known as the “Rojos” is a cell-related to high impact crimes such as kidnapping, vehicle theft, and extortion. In addition, they are known for their operations in drug trafficking in the central-eastern part of the country.

Santiago “M”, identified as  “Carrete” and/or “El 8” and/or “El Señor de Los Caballos”, and who is credited with being the leader of the criminal group  “Los Rojos”, received  20 years in prison, as well It was reported by the  Attorney General’s Office (FGR) in August 2020.

According to a statement from the  Attorney General’s Office, the  “Carrete”  was detained in August 2019 by elements of the Secretariat of Security and Citizen Protection, who completed the corresponding arrest warrant. This subject is credited with being a member of the criminal group “Los Rojos”, operating mainly in the state of  Morelos.

These criminals are mainly dedicated to the distribution of the drug known as cocaine hydrochloride, among other members of the criminal organization for national consumption.

Although they had a high presence in states such as Morelos and Guerrero, members of the “Rojos” have been detained in Puebla and Oaxaca. At present it is unknown who could lead this criminal group, however, unconfirmed versions suggest that they are relatives of   Santiago Mazari, alias, the “Carrete ”.