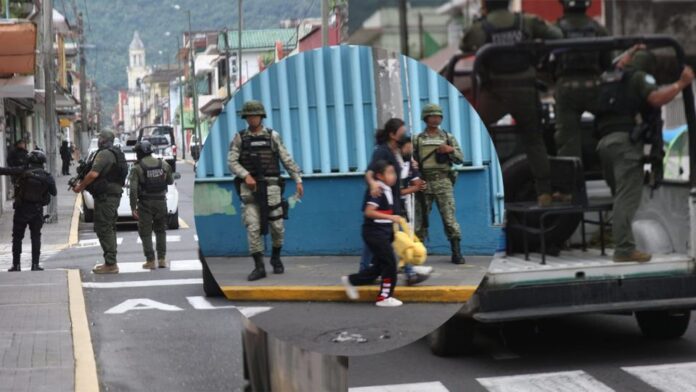 Various users on social networks and the media reported firearm detonations in the center of Orizaba, Veracruz. After reports to the 911 emergency line, the authorities activated the Red Code operation in the entity. Preliminary reports indicated that the confrontation took place on Calle Sur 15 and Oriente 4.

Members of the Secretary of Public Security ( SSP ) of Veracruz maintained a strong shootout against alleged criminals in the vicinity of a safe house.

The detonations of firearms derived from the fact that security elements found a place where a criminal group was, where the agents were received with bullets.

Through a statement, the authorities indicated that “Elements of the State Police, Civil Force, Semar, Sedena, National Guard and Municipal Police maintain deterrence and surveillance actions in this municipality.”

In one of the videos circulating on Twitter, you can see a soldier asking citizens to stay close to the wall to avoid being hit by bullets. Given these indications, some people remained glued to the floor.

Several people were able to document through videos how the loud detonations were heard, in addition, some people who were in the streets decided to abandon their vehicles in order to find shelter and not be hit by the bullets.

Shooting in Veracruz: code red activated after shooting and persecution (2)

0 seconds of 15 seconds Volume 100%After intense shootings derived from finding a safe house where there was a criminal group, the Red Code was activated in Veracruz.

In the place of the attacks, a security perimeter was built between South 11, South 13 and 15, with Colón East, East 2 and East 4, closed to vehicular and pedestrian access. In addition, members of security have supported people who have been caught in the crossfire.

Through a statement, the authorities asked the population to stay in their homes until further notice as well as to avoid danger zones. 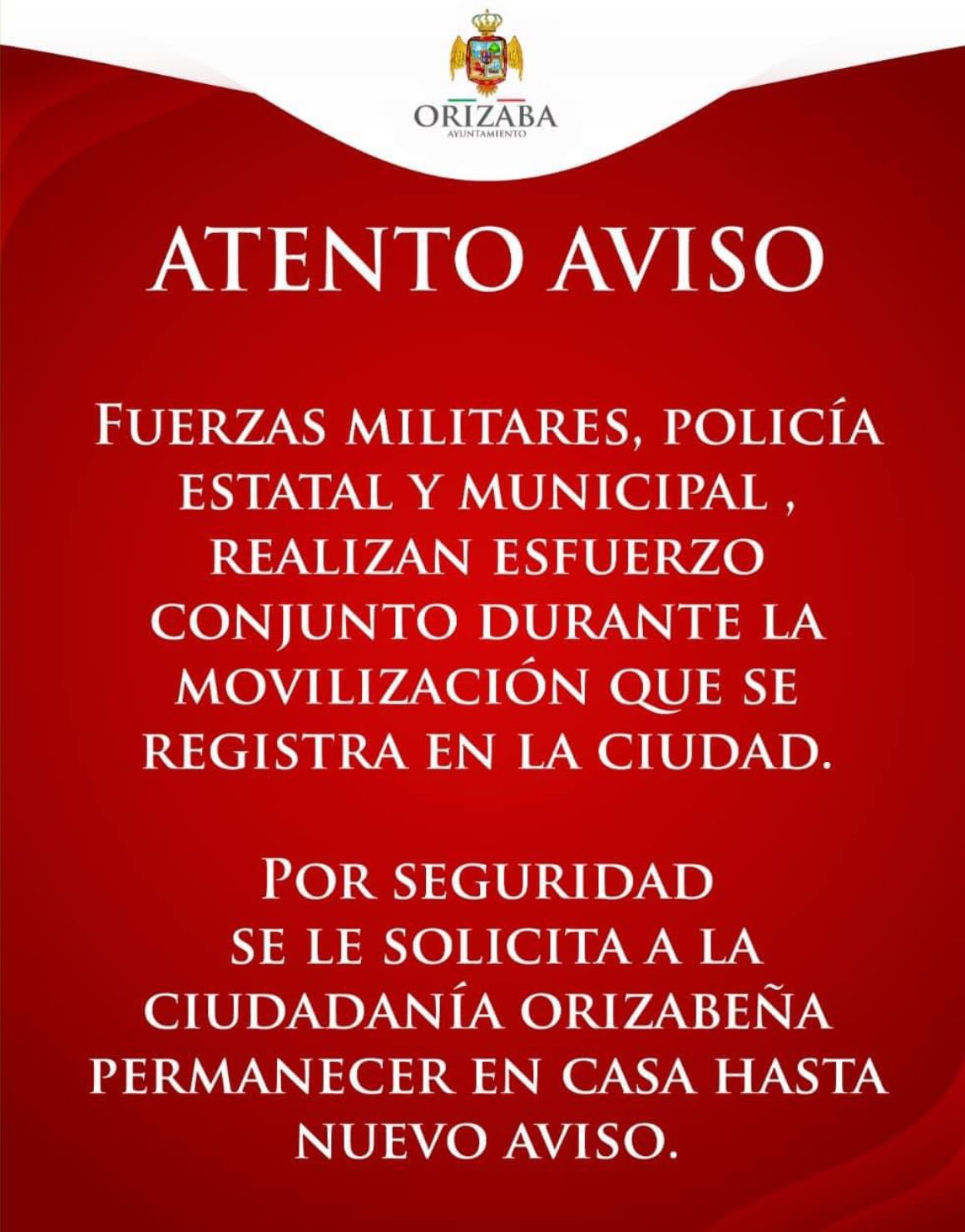 Due to the shootings, various commercial establishments closed and schools applied security protocols, among them at the National Technological Institute of Mexico (TecNM) Campus Orizaba.

After the detonations of the firearm, a helicopter flew over the area where the confrontation took place for approximately one hour. Power outages were reported in some areas. It should be noted that so far no victims or injuries have been reported, nor is there information on detainees.

It should be noted that a burning trailer was registered on the Ciudad Mendoza-Córdoba highway, at kilometer 281. According to information from local reports, armed persons stopped the vehicle and set fire to the entrance that adjoins Puebla.

In another video, shared by the journalist Azucena Uresti through social networks, three of the alleged criminals turned themselves in to the authorities, “We said we were going to turn ourselves in and I have my word, but they killed my comrade” can be heard on the recording.

A blockade was also reported on the Fortín Orizaba highway, where a cargo unit was set on fire. Firefighters from Córdoba and Fortín went to the area in order to put out the flames.

In another recording that circulated on social networks, you can see two alleged assassins who participated in the shooting. After being cornered, they are afraid of dying and intend to turn themselves in to the authorities. “I have no weapons, we are going to surrender, we want the sailors,” can be heard in the video.

It should be remembered that on September 4, the retention of various policemen by residents and even an armed attack on the inhabitants was recorded that left several people injured.

These actions derived from a confusion because last Thursday, September 1, it was announced that the municipal president of Soteapan was about to be arrested by elements of the Civil Force, who had confused him with another person.

According to reports from the SSP of Veracruz, state police received a report from C4 for the presence of armed men aboard a Hilux-type van.

The troops moved to the aforementioned point, in the section of the Santa Cruz-La Lealtad subdivision, where they located a unit. Mayor Rafael Hernández was traveling on board a truck with other public officials.

Guadalajara Cartel (CJNG) behind the violence that unleashed terror in Orizaba

After the day of violence that took place in the center of Orizaba, Veracruz, state authorities announced that two subjects were captured and one more was killed. Among the detainees, Faustino “N”, alias El Tino, alleged member of the Jalisco Nueva Generación Cartel (CJNG) was identified.

Hugo Gutiérrez Maldonado, Secretary of Public Security of the entity, was in charge of reporting the results of the operation of the security forces. In the audio message that he shared via social networks, he stated that El Tino worked for El Momo, the regional leader of the CJNG cartel.

At the time of his arrest, El Tino was carrying a long firearm and a fragmentation grenade. Although the Orizaba City Council, headed by Juan Manuel Diez Francos, reported that “the city returned to normal,” the security forces stated that the operation would remain active during the early hours of this Tuesday morning, in order to “Restore order in the area.”

Gutiérrez Maldonado did not offer any details of the other subject detained or of the presumed criminal neutralized during the confrontations.

It is presumed that El Tino could be one of the two alleged assassins who, after participating in the shooting, took refuge in a home and requested the withdrawal of the State Police agents, as they assured that they would turn themselves in.Ra4BSRG Omnia.com.mx

After two hours of shooting, in a face-to-face meeting with security agents, one of the alleged members of the CJNG specified that they would only hand themselves over to “Jonathan Martínez and the Civil Guard.”

In response, the officers informed him that they were going to make them available to the State Prosecutor’s Office, to which the alleged hitman questioned, with a trembling voice, “Are you going to hit me.” “I give you my word brother, I’m not going to hit you,” replied one of the agents.

At the end of the dialogue that can be heard in the material, the alleged criminal alleged that “we said we were going to turn ourselves in, I have my word and they killed my comrade.”

Streets in the center of the city looked empty due to the fear that the confrontation would spread.

“The city returns to normality”, the message from the authorities

After 10 p.m. on Monday, September 12, the Orizaba City Council shared a statement on its social networks in which it assures that “the city returns to normality” and that there are optimal conditions for this Tuesday the 13th to carry out “the regularly scheduled activities.

Additionally, and given the uncertainty of the community, they commented that the situation would allow the development of classes with total normality. However, the educational institutions that were directly affected by the clashes suspended classes for this day.

When will Mexico’s seismic alert be activated on cell phones

Live: follow the trajectory of the green comet and its passage through Mexico