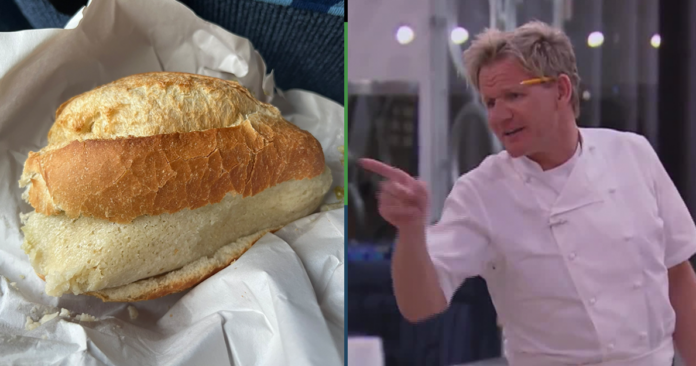 They were told, chilangos: Tamal torta is declared one of the worst dishes in the world

Market of inventions.- The tamal torta or “guajolota” has been declared one of the worst dishes in the world, and well, the chilangos were warned.
The top was published by the site “TasteAtlas”, which is an encyclopedia of traditional dishes according to their geographical location, which puts the strange sandwich not suitable for provincials in the # 7 place of the worst street dishes (or street food as your compa el mamador would say) from all over the world.

In addition to the always strange tamal torta, “the Cuban torta”, the Dutch “Kapsalon”, the pork pie from England, the Filipino “Balut”, among other crap around the world appear at the top
Finally, someone told the truth about the tamal torta The site explains that “tamal torta” or “guajolota” is “a popular Mexico city street dish for breakfast consisting of a soft bolillo stuffed with a tamale.

In Oaxaca, the tamal is typically filled with black mole and shredded chicken.

Similarly, TasteAtlas explains that “in addition to its strange flavor, the dish replicates the number of carbohydrates that is also commonly accompanied by corn-based atole.” In other words, in addition to being bad, it is also not very nutritious and not healthy at all.

As if that were not enough, number eight on this list is represented by the “Torta Cubana”, something that buffet lovers and proud users of the phrase “everything turns in the stomach” disagree. This note will provoke a wave of subjectivists saying that “everyone their tastes”, “so what? I love it” or the aggressive/passive/resigned comment of “they don’t know what they are missing”, among others. that they forget that in the same way the tacos de pastor, the pozole, or the mole have been declared Intangible Heritage of Humanity and there they did agree.

Now all that is needed is for there to be a study that clarifies once and for all that lactose-free tortillas cannot be called “quesadillas” under any circumstances and now the world will be at peace.