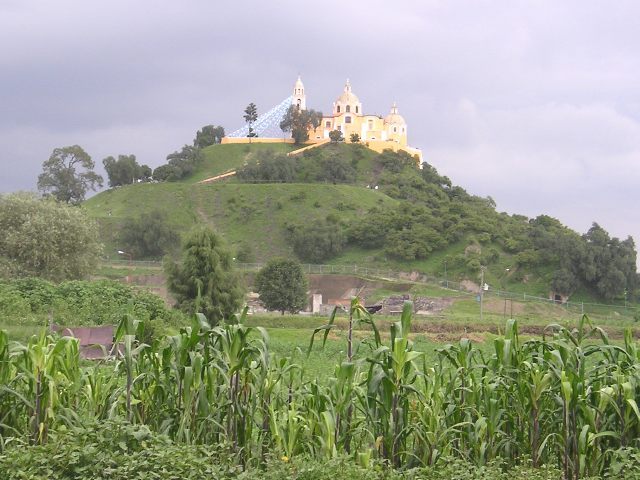 Thanks to the brush and grasses that had overgrown its walls, the largest man-made pyramid in the world has been mistaken for a hill. Even today, it’s understandable how this came to pass, thanks to the old Spanish chapel perched at its summit.

Originally constructed over 2000 years ago, the Great Pyramid of Tepanapa (often referred to as the Great Pyramid of Cholula) boasts a larger volume than any other ancient, man-made structure including the Egyptian pyramids. Stylistically, the pyramid is an oddity, puzzling archeologists to this day by incorporating architectural elements of both the Teotihuacan and El Tajin civilizations.

During the many pre-Columbian power shifts in Mexico, the pyramid itself fell out of use in favor of other structures, such as one of the many sacrificial altars on the ten-acre site. It is unclear whether it was through disuse that the pyramid became overgrown with shrubbery, or if, when the Aztecs caught wind of the impending Spanish arrival, the Cholulans literally buried the pyramid in a last-ditch, communal effort to preserve the massive temple, an important piece of their culture.

Either way, when the Spanish arrived at Cholula in 1519, Cortes and his men were so occupied with the decimation of the indigenous people and their more conspicuous holy sites that they failed to recognize the pyramid as such, instead of thinking it the perfect hill site for one of their countless new churches! Within the year, La Iglesia de Los Remedios was constructed, where it remains to this day.

As the dirt began to fall away, the pyramid revealed itself to archeologists, who have excavated the pyramid’s stairways, platforms, altars, and over five miles of tunnels snaking through the structure’s innards.

The site and its network of tunnels are open to visitors for guided and unguided visits, though it is advised to confine exploration of the tunnels to daylight hours.