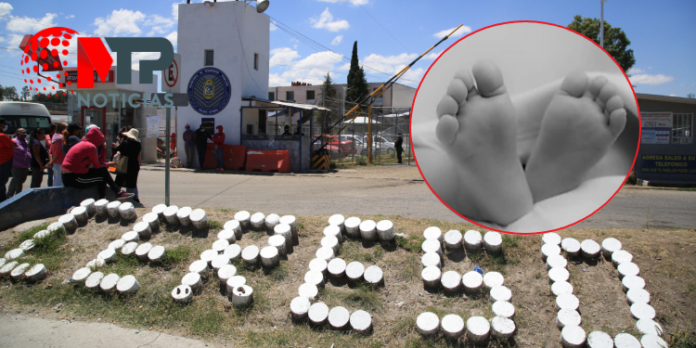 The minor’s body was found in the recyclable plastic containers covered with lime and inside a bag.

On January 10, the news about the discovery of a newborn corpse inside the garbage cans of the Social Reintegration Center (Cereso) of San Miguel, Puebla, Mexico, was released in various media.

Given the discovery, there were not many details of the event, other than that the minor had been “found” in that place, “unbelievably”, it was not known how the body had entered, apparently “nobody had seen anything, nobody knew anything”.

Unofficially, it was said that the body entered the Social Reintegration Center during a family visit and some time later, a prisoner was the one who found the baby’s body in a garbage can.

At first, it was suspected that he died inside the prison, without specifying the cause of death, the first clue was that the body of the “newborn” had a wound in the abdomen.

The activist Saskia Niño de Rivera, director of the civil organization Reinserta, questioned the authorities that monitor the prison by allowing her entry, and not having acted by not registering her exit. “By pure coincidence an inmate found the baby’s body in a dumpster,” he said.

The minor’s body was found in the recyclable plastic containers covered with lime and inside a bag.

Subsequently, the CNDH issued a statement in which it reported having “determined to exercise its power of attraction and initiate the corresponding investigation of the facts.”

However, no more was known about the case, if not until the same parents of the minor tied the dots in the scare.

Whose body was the baby? The baby’s name was Tadeo, he was born on October 4, 2021, and due to intestinal problems, he died on January 5 of this year, on January 6 his parents buried him in the delegation that governs Clara Brugada Molina, in a pantheon of Iztapalapa.

The parents, whose names are not yet known for privacy reasons, learned of the discovery of the body of a minor in the Puebla Prison, what was alarming was that the only clue that was known to date was the scar that the minor presented in the abdomen, which caught their attention, because their little Tadeo, recently deceased, had a wound in the same place.

Therefore, and in addition to a hunch, the parents went to the pantheon where their little one had been buried, to verify that his body was as they had left it.

However, the surprise was unpleasant when he realized that his son’s body was not there.

“In the cemetery, they threatened them to keep quiet. Today the parents are in the Prosecutor’s Office demanding to recognize the minor’s body, “said Niño de Rivera.” informed the director of the civil organization Reinserta

Other information: On the other hand, the journalist Manuel López San Martín, released a document on his social networks that, he assured, is the baby’s death certificate. In said official letter, it is observed that the minor died at the Iztacalco Pediatric Hospital due to acute pulmonary hemorrhage, disseminated intramuscular coagulation and septic shock.

So far, and despite the fact that an investigation folder is already open by the Mexico City Attorney General’s Office, the authorities remain unclear about how the body arrived at the Puebla prison and for what purposes.

José Félix Cerezo Vélez, president of the Human Rights Commission (CDH) of the State of Puebla, said that the body in charge will carry out the necessary steps to clarify how and when the baby was admitted to the prison.

“Proceedings are being made to find out when he entered, who entered him, if they entered a corpse, if they admitted a child, when the restrictions on the part of the prison indicate that from 2020-2022 the entry of minors cannot be allowed, including babies, pregnant people and older adults,” he explained.

However, unofficially it is stated that the minor’s body had been ‘stuffed’ with drugs so that he could enter the prison without ‘problems’, it should be noted that said version is not yet confirmed and the authorities have not made any statement about the signaling.

Profile of the Cereso de Puebla

The Social Reintegration Center (Cereso) of San Miguel, in Puebla, has  a maximum capacity for 2,100 inmates; however, it reports an overpopulation of 40 percent, since counting more than 3 thousand male inmates and at least 350 women; in addition to facing a series of accusations for its lack of security and control.

Since its creation, the prison located at kilometer 2.5 of the Camino al Batán highway, belonging to the Lomas de San Miguel auxiliary board, has had various problems. Only last December 6, an inmate was beaten to death by other colleagues who tried to extort money from him; the crime occurred a week after he unleashed a riot in dormitory L, an area controlled by Sergio Contreras Chávez.

The National Human Rights Commission (CNDH) revealed in early 2021 that “celebrations” were organized in prison with the authorization of the prison authorities on weekends in 2019, where inmates were prostituted in an environment controlled by drug dealers and charging various fees.