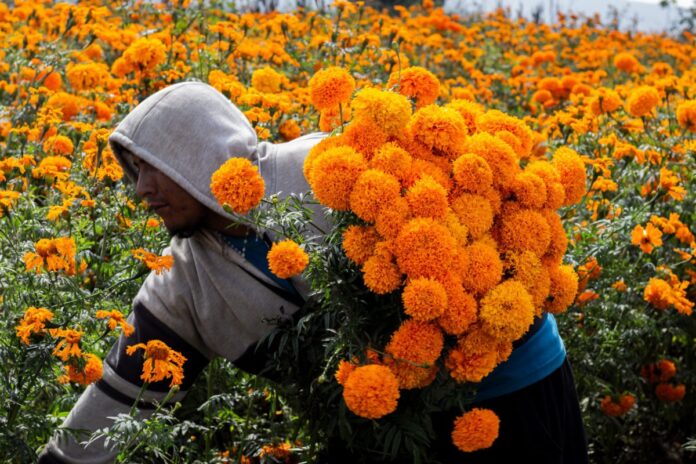 Flor de Cempasúchil (Marygold Flower) is the iconic element of the Day of the Dead altars nationwide.

This season, one of the many nurseries in the state of Puebla expects to commercialize 500 thousand plants and generate an economic benefit of 42 million pesos.

Puebla occupies the first national place in the production of Cempasúchil flower, informed state authorities during the presentation of the beginning of the Day of the Dead season; growers expect to market up to 500,000 plants this year.

This was announced by the representative of the Cabrera Nursery Union, José León Carrasco, who pointed out that there are more than 100 producers from towns such as San Juan Tianguismanalco and Atzitzihuacan.

He commented that the water that comes down from Popocatepetl and the climate of the Atlixco region have favored the development of the Marygold flower in the best way in four colors: orange, yellow, bonanza, and vanilla.

This season, Cempasúchil will generate over one thousand direct jobs and another three thousand indirect ones. For 10 years, producers have been selling Marygold Flowers in pots, with a price per pot of 15 to 30 pesos.

The undersecretary of Rural Development in Puebla, Óscar Hernández commented that for this year an economic spill of 42 million pesos is projected, nine million of these in Atlixco.