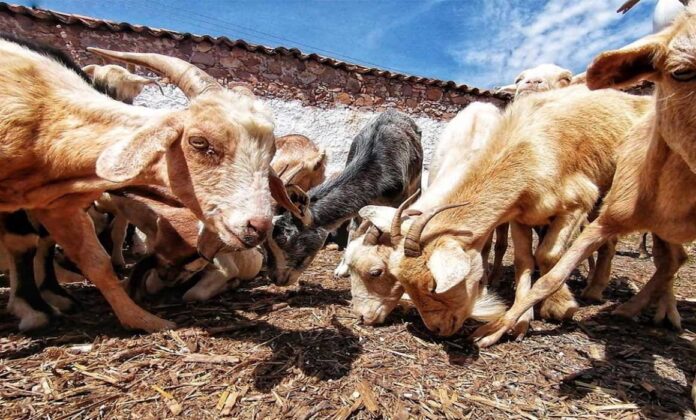 HUAJUAPAN DE LEÓN, Oaxaca.- Arriving on October 15, Huajuapan de León begins the season of mole de hips, a unique dish in the Mixteca region; the chiteros are in charge of removing the meat from the goat to salt it and let it rest for several hours in the sun so that it becomes a chito; the chiteros are in charge of this, one of the oldest trades in this demarcation.

The representatives of the El Rosario ranch in Huajuapan de León, reported that in 2021 7 thousand goats will be sacrificed for the festival of hip mole in this municipality.

Raúl Flores Cesáreo, a chitero for many years, reported that they travel from Zapotitlán Palmas to Huajuapan to participate in the slaughter, where 250 to 300 goats are sacrificed a day, so that the chitero separates the meat from the bones of the hips and it is packed and taken to the state of Puebla or to the United States.

He added that the chito is the dried meat of the goat, which underwent a salting process and was aired under the sun’s rays for several hours; Seven people are involved in this process, all from Zapotitlán Palmas.

One of the most sought after delicacies

He explained that the chito can be prepared roasted, fried, in beans, chilate or mole, and is one of the most sought-after delicacies in recent years in the Mixteca region, since visitors prefer it and pay hundreds of pesos to be able to try it.

Flores Cesáreo commented that “the meat of the chito is the meat of the arm and the hips, and my job is to extract the chito from the goats; we are part of a squad of chiteros; previously we were 21 and now we are seven, but we come to work with great pride ”.

He said that they arrive at the Hacienda El Rosario in Huajuapan on October 11 and the cleaning of the place is carried out, to receive the first armful of goats that will be slaughtered.

He added that they prepare the mats and the salt that will be used to salt the chito’s meat; In this way, they begin the slaughter that they carry out each year and that serves to bring money to their families, who remain in Zapotitlán Palmas to make preparations for the Day of the Dead celebrations.

Don Raúl – as they know him in the slaughter – said that he receives 22 pesos per goat, so in the end, a count is made of how many goats were slaughtered and the total money is distributed among the crew of seven people.

“The chito that you see lying on the backpacks is the one that was taken out since October 11 and the one that I just laid out is from this October 15; in another hour we will pick it up, pack it and go to the warehouse; and it is that from there it goes to the city of Puebla to be able to commercialize it ”, he commented.

He said that in three days of slaughter 810 goats have been sacrificed; Although the Mole de Caderas festival began on October 15, the workers of Hacienda El Rosario showed up on the 11th of this month, when said activity began.

The chitero said that at Hacienda El Rosario there is no specific schedule to work, since the days can start from 3 in the morning and end at 10 at night; the only days they rest are from October 28 to November 4, when they return to their communities to celebrate the faithful departed.

He commented that he is happy to go to work, because it is a very old custom that was inherited from his parents and grandparents, and now his children learn this way of life.

He stressed that with the COVID-19 pandemic, many inhabitants of Zapotitlán Palmas died; However, those who dedicate themselves to this old profession were not affected, so they will wait until the season ends to be able to bring some money because the economic situation is very complicated.

For more than 100 years, Mixtecos have eaten chito

The historical collections in Huajuapan de León and the Mixteca region, detail that since the site of Independencia, in 1812, the chito or dried goat meat is prepared to be able to overcome the famine that this historical fact left behind.

When the royalist Army invaded Huajuapan, the inhabitants of this municipality finished their provisions in less than 30 days and in order to survive the difficult situation, they began to eat dried goat meat; After Morelos broke the siege, the Mixtecos once again consumed the local products of the demarcation.

Chito is the second most demanded delicacy in Huajuapan, so the chitero is one of the oldest trades in this area and that very few people know.

October the chiteros arrive at the Hacienda

pesos the chiteros charge per goat