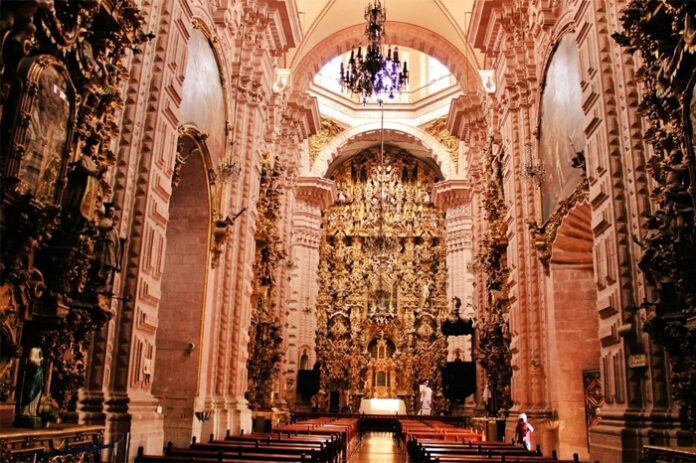 We present a list of 6 of the most attractive religious buildings that exist in our country.

Mexico. Our country is such a treasure of architecture, for hundreds of years that churches began to be built and many of them have survived to this day. The churches in Mexico are an architectural jewel that has prevailed and that is worth knowing, for this reason, we present a list of six of the most beautiful churches and temples that exist in the country.

This church dates from the late eighteenth century and is characterized by being a worthy representative of the Baroque in the country, the large number of ornaments that adorn the walls, vaults, and ceilings of the enclosure. On the outside, it may look like a fairly ordinary church, but inside you will be amazed at all the colors and angels and ornaments found in it.

Unlike the previous one, this one has a neo-Gothic architecture, which is why its wooden doors with bronze-colored reliefs and stained-glass windows stand out. The facade of this church, along with its clock, are the things that stand out the most, the clock plays music that makes the figures of the twelve apostles rotate inside and out like a kind of cuckoo clock.

This enclosure was created in the seventeenth century, it belongs to the Baroque, and without a doubt, it is one of the places that most represents the magical town of San Cristobal de las Casas and represents Mexican colonial art in all its splendor.

This parish is not only an architectural jewel, but it is also for sculpture and painting, since within it it houses nine altarpieces that are covered by a layer of gold leaf, this being a sample of New Spain’s Baroque.

Its history is somewhat different, as it was ordered to be built by a rich mining businessman named José de la Borda, in the mid-18th century.

Its largest altarpiece is dedicated to the Immaculate Conception and to the patron saints of the city of Taxco de Alarcón: Santa Prisca and San Sebastián.

Undoubtedly this enclosure attracts the attention of young and old, its cheerful and colorful ornaments make it be admired by all, this church represents the indigenous baroque and its history is as interesting as it is itself.

It was built in the 16th century, but between the years of 1752 and 1822, the natives retouched it in their own way, hiding their gods within the ornamentation, for example, you can find the god Tlaloc, who is hidden among the fruits and reliefs.

The temple is one of the greatest attractions in Oaxaca, it belongs to the Mexican baroque and is located in the center of the city.

The whole place is full of angels, saints and other ornaments, which stand out everywhere, inside it are several paintings, thirty-six to be exact, which represent passages from the old testament. In addition, you can also find the genealogical tree of Santo Domingo.

Map of covid in Mexico October 9: only 6 states concentrate 50% of total deaths