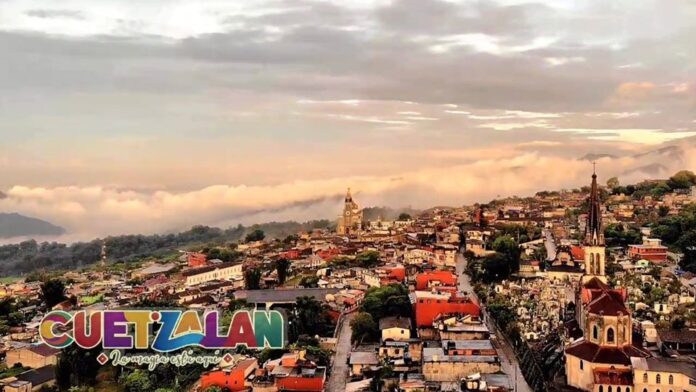 The name of the town is formed by the Nahuatl roots  “quetzalli”: Shiny, beautiful thing; «Lan»: together, close, which means:  «Along with the beautiful birds called quetzal». According to the testimonies of the tatas, they say that their grandparents told them about the existence of these beautiful birds, even as the town of Cuetzalan is mentioned, it owed tribute to the Tenochca empire that consisted of quetzal feathers, so it is not difficult to guess this definition.

Cuetzalan is settled between the foothills of the Sierra Madre Oriental, at just over 1,000 meters of altitude, which is why it enjoys a warm humid climate. There are 174 kilometers that separate it from the city of Puebla in a picturesque route, abundant with beautiful panoramas. One of the main attractions is its geographical position between large and deep ravines that are always very green, through which rivers such as the Apulco, Cuichati and Zoquiate run, tributaries of the Tecolutla river in Veracruz. Its inhabitants produce one of the most aromatic and recognized coffees in the country. In every corner of its streets, there is a beautiful landscape that invites you to explore them and discover their surroundings.

It is located in the northeastern part of the state. It borders to the north: with Jonotla and Tenampulco; to the east: with Ayotoxco de Guerrero and Tlatlauquitepec; to the south: with Zacapoaxtla; west: with Zoquiapan.

Also known as the Park or Zócalo of our municipality, it is the center of our Town in which several architectural monuments are concentrated such as the Clock, the kiosk, the Municipal Palace, and the Parish of San Francisco de Asís. Around it you can find craft shops, food, and lodging for different tastes and budgets.

Cuetzalan is distinguished by its white cotton, artisela, and wool garments, also by those made on a backstrap loom such as sarapes, shawls, jorongos, cambayas, curtains, and shawls. They work with wood to create furniture, cedar crosses, drums, teponaxtles, rattles, flutes, violins, and masks. On Sunday a variety of objects are exhibited in the tianguis, from hats and baskets to ceramic pieces and miniatures of wood and cloth.

The Cuetzalan area was once populated by birds of wonderful colors, called “quetzals” and that is precisely one of the origins of the name of this population: “abundant place of quetzals”, whose feathers were given to the Aztec people as tribute from the times of the emperor Axayácatl, in 1475.

DANCE OF THE QUETZALES

It is originally from San Miguel Tzinacapan, Cuetzalan, and arises from a set of rituals and traditions preserved generation after generation. Currently, it is danced to celebrate patron saints such as San Miguel Arcángel. The dance begins with a greeting outside the church or the house of the butler, they enter the church dancing and give thanks to their patron Saint Michael the Archangel, then they go out to dance different sounds. The dance is distinguished by the use of large colorful plumes that were formerly made with quetzal feathers that represented fertility, abundance, and life. The cape they wear is red and blue, from which seven-colored beards hang, representing the time they must dance for their patron saint. They carry with them two joined maracas called “Mochis” which signify the movement of the world.

PARISH OF SAN FRANCISCO: The parochial temple, dedicated to San Francisco de Asís, was built in the middle of the 16th century. Its tower is the highest in the state, with a Renaissance style with Romanesque characters and at the beginning of the 19th century, an eclectic style clock tower was added. The parish is located in the center of Cuetzalan and the patronal feast is celebrated on October 4. The first registered parish priest was the priest Juan Miguel Sánchez Izquierdo (1771), the predecessor of José Arellano (1786), Joaquín Royano (1846), and of the current parish priest, Fr. Mario Pérez Pérez. Sunday mass at 12:00 hours is sung in Nahuatl; here, the indigenous roots and traditions are present in the form of dance and music, where mestizo floral ornaments and the Virgin Mary are joined in her typical costume.
Hours: Sunday celebrations – 7:00 a.m., 9:00 a.m., 11:00 a.m., 1:00 p.m. and 7:00 p.m.

Sanctuary of Guadalupe or Iglesia de los Jarritos: Its baroque style with neo-Gothic reminiscences dates from 1889, being consecrated in 1895. Its tall and slender tower has yarns of clay pots, carefully threaded and for this detail, it is popularly known as the «La Church of the Jarritos ». Its pulpit is carved in fine woods and is topped by a painting of the Virgin of Guadalupe in the center. Its flamboyant Gothic style imitates the basilica of Lourdes in France and in the atrium of the church, there is the oldest cemetery with tombs crowded together, all facing the front of the church, because according to the locals, the being closer to the church, they could enter heaven first.

MUNICIPAL PALACE: The construction of the current building began in 1939, ending in 1941, its architecture is in a rustic neoclassical style; semi replica of the basilica of St. John Lateran in Rome. This building has a third portico with columns, a straight pediment, and a national shield in the center.

The building has a replica of the sculpture of Emperor Cuauhtémoc, by Isauro Bazán, which is located on the Paseo de la Reforma and Insurgentes in Mexico City, causing a collage of classic Western architecture with indigenous presence of the time.

Includes: round private transportation from Puebla, tourist guide and access ticket to Yohualichan

Hours: 6 AM suggested (we will pick you up at your hotel)

Puebla’s hotel offer is wide and varied. There are options for all tastes, needs, and pockets. A thriving city with so much historical wealth has to live up to the requirements of the tourism sector.

For those who seek a taste for detail, Puebla offers the elegance and warmth of its Boutique Hotels and its colonial mansions specially prepared to provide an unforgettable stay.

Nature lovers will find many  options for lodging in cabins  in Chignahuapan, Cuetzalan, Tetela de Ocampo, Zacatlán, Huauchinango, Zacapoaxtla and other locations.

SEARCH, FIND AND BOOK YOUR HOTEL  with the platform offered by CorazondePuebla.com.mx and Booking.com