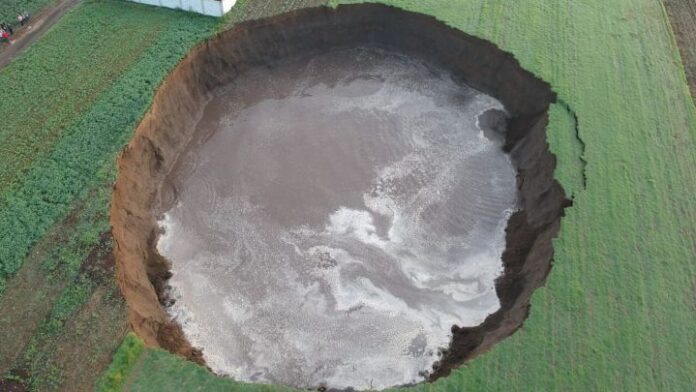 The authorities believe that it is the result of a geological failure and water variations in the soil, but activists blame it on the overexploitation of water.

Last weekend, a huge sinkhole whose diameter has been growing was opened in the state of Puebla, in central Mexico, according to the first investigations of the authorities. “It is a matter of enormous risk. I tell the people of Puebla and the people of the region that we are going to be aware that there are no human tragedies, ”said the governor of Puebla, Miguel Barbosa, at a press conference on Monday. At the moment, there have been no injuries or fatalities and the surrounding houses have been evacuated.

“It is a geological fault that must be attended to with great care, with technique and with all the precautions and we are doing it,” added Barbosa, who assured that the causes of the subsidence will be investigated. In this regard, Beatriz Manrique Guevara, Secretary of the Environment, Sustainable Development and Territorial Planning, specified that the deadline for the results of the mechanical studies of the soil should not exceed 30 days.

Theories about its origin

The sinkhole last Saturday in a growing area in the municipality of Juan C. Bonilla and now reaches a diameter of more than 60 meters and 20 meters deep, according to local media. Environmental authorities explain that the cavity could have been produced by a geological fault and hydric variations in the soil and subsoil.

However, residents and local activists attribute the phenomenon to the overexploitation of aquifers by large industrial conglomerates. “In this whole area, there is brutal overexploitation of water. Where they have taken the water there are now holes, voids, caverns, and when the humidity starts to appear these sinkholes appear ”, says activist Miguel López, from the Frente De Pueblos Morelos Puebla Tlaxcala. In fact, he estimates that there is a risk of more similar holes occurring in some 40 hectares of that region of Santa María Zacatepec.

For their part, some inhabitants say that there used to be a surface water reservoir in that area, which with the passage of time dried up and became covered. This peculiarity could explain the instability of the terrain and the propensity of the sinkhole to increase in diameter if measures are not implemented.

In addition, the gas pipeline that connects with the thermoelectric plant built in Huesca, Morelos, covers several sections through this type of watery terrain, as happened in Atlixco, Tlaxcala, and in the municipality of Zacatepec itself, which represents a risk for the communities of the sector.