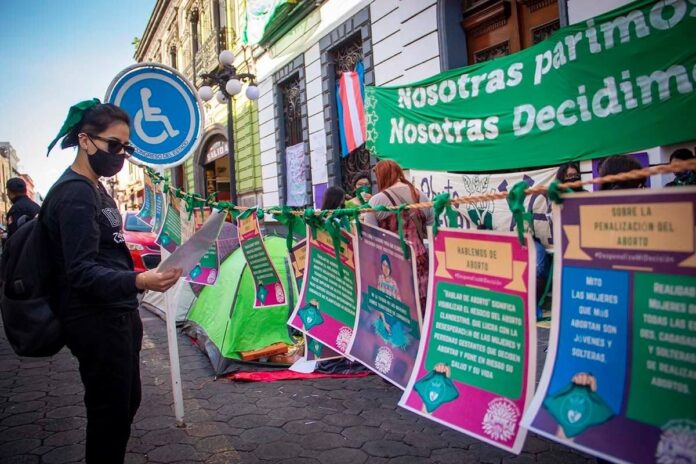 The Feminist Coordination of Puebla accused the Undersecretary of the Interior, Ardelio Vargas Fosado, of building a scenario to repress, dismantle and delegitimize the feminist struggle in Puebla.

PUEBLA.- The Feminist Coordination of Puebla accused the Undersecretary of the Interior, Ardelio Vargas Fosado, of building a scenario to repress, dismantle and delegitimize the feminist struggle in the entity, in order to justify the breach of agreements signed with the local Congress, such as the discussion of the Law of Legal Interruption of Pregnancy.

In response to the remarks made by Miguel Barbosa Huerta, 14 groups regretted that the Puebla president chose to criminalize and use the protest for political purposes, instead of addressing the claims and proposals made by women and victims of violence in the entity.

The governor acknowledged that since March 8, investigation folders were opened to locate those responsible “political, material and intellectual” for the damage caused to buildings, houses, and vehicles during the march in this city.

The president ruled out that this represents “criminalizing social protest,” since the March 8 march in this capital, he said, “was not a protest, it was the vandalization of many places.”

In response, the collectives integrated into the Feminist Coordination of Puebla accused that during the marches in the entity there was a provocation, media lynching, infiltrations, and now there is a glimpse of fabrication of culprits.

“The government of Puebla is evading the background of the march, criminalizing and returning all the burden to women; The purpose of this articulation was to demand that the state and the institutions comply with various demands, which should not go unnoticed ”, they stressed.

The organizations warned that the actions of the state government point towards the repression of the movement, and it is evident that behind that is “the hand” of Vargas Fosado, who was at the forefront of operations against the residents of Atenco and has just joined Barbosa’s cabinet.

And more: “It is clear that we are facing the scenario of repression that Ardelio Vargas, undersecretary of the Interior of Puebla, has built to dismantle the work with the Puebla Congress.”

For this reason, they made a call to the feminist collectives of the country and to the Puebla society “to be alert, because it is certain that the repression reaches grotesque dimensions; likewise, we reject any attempt by the state government to dismantle the emerging women’s movement, with the imminent objective of delegitimizing the struggle to not comply with the agreements reached in the takeover of Congress ”.

It should be remembered that the organizations articulated in the Feminist Coordinator of Puebla participated in the takeover of the local Congress from November 24 to December 18, after which an agreement was signed with the legislators that include the discussion of the Law of Legal Interruption of the Pregnancy in the entity before April 15.

The Feminist Coordinator of Puebla has made it clear that on March 8 there were at least four marches in the capital and that the largest articulation of feminist and trans groups that left the State Human Rights Commission to end in the State Attorney General’s Office did not participate in the violence that arose in the local Congress and the zócalo.

On International Women’s Day, one of the feminist groups set fire to the door of Congress and damaged other adjoining buildings, in addition to vandalizing private cars that were parked nearby.

The Frente Feminista Radical Puebla (FFRP) and the Bloque Negro Puebla (BNP) acknowledged having led that march that implemented actions “of radical resistance” in the legislative headquarters, however, they separated themselves from the damage caused to private vehicles.

In a statement, they indicated that their protest was directed only towards the institutions of power, but that at no time did they violate the property of civilians.

“The women responsible for the attack on private businesses and cars parked in front of the state Congress was not part of the Black Bloc or the Radical Feminist Front Puebla because they did not follow or respect the strategies set out.”

Although they dissociated themselves from these actions, the radical feminists clarified that they are not going to “disagree” with those responsible either.

The FFRP and the BNP – which are not part of the Puebla Feminist Coordination, because they did not coincide in the incorporation of trans groups – carried out a collection yesterday to pay for the damage caused to the car owned by a doctor, parked in front of Congress.

Both the radical groups and the Feminist Coordination also dissociated themselves from the participants in the march that tried to provoke a confrontation with members of the Union of Street Vendors “October 28”, when they passed through the zócalo.

A feminist from the Coatlicue Siempre Viva collective argued that, on the one hand, they can understand that the anger of mothers and victims of violence can be expressed with despair and fury, and argued that this overflow is the responsibility of the three levels of government, Congress and of the Prosecutor’s Office for “turning a deaf ear and not solving.”

However, he indicated that the people who carried out burns, destroyed private cars, pints of hatred and provocations on October 28 were hooded, “so we cannot clearly specify if they were part of any group, they were deeply indignant or infiltrated from the right or the government to discredit ”.

Miguel Barbosa also accused that civil servants and workers from the Puebla city council participated in the March 8 demonstration, led by the Morenista Claudia Rivera, who is recognized as a feminist.

Although the president stressed that his government will act “with great care” regarding what happened and will let the Public Ministry carry out the investigations, on several occasions he said that the municipal government was involved in the damage caused to public buildings and private property.

“We will have to meet the authors or intellectual or material authors … everything will be known, the political responsibilities, the intellectual ones, we will solve everything for the good of Puebla,” he said.

At a virtual press conference, representatives of organizations such as Coatlicue Siempre Viva, Redefine, Trans’versales, iamat Kuvi, Periferia, Articulación 8M, and Kiki House of Marihka reproached that, given the proximity of local elections, Barbosa Huerta used the feminist movement to attack “Whom he considers his enemy in the fight.”

“It is cruel that they put us in this political game and distort the demands we have, which are many; It seems that women always when we go out to demonstrate, someone has to be behind us to manipulate ”, claimed one of the feminists.

In response to the governor’s remarks, Mayor Claudia Rivera asked Barbosa not to criminalize feminist protests and not launch accusations “lightly” against officials and workers of her administration.