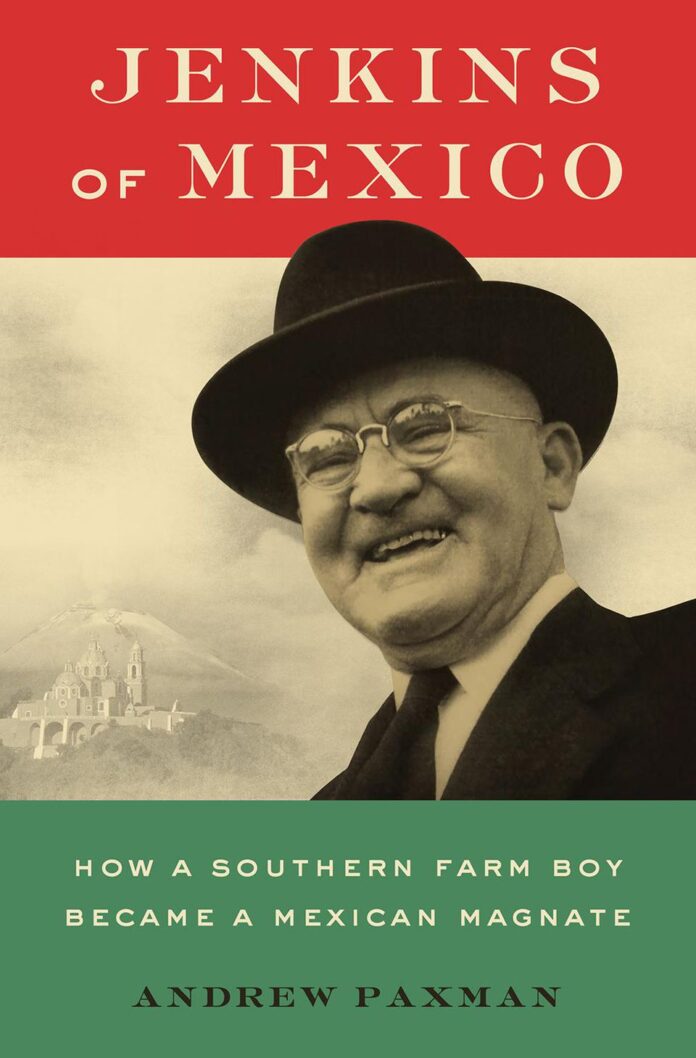 William O. Jenkins, an enigmatic American from Tennessee who adopted Mexico as his country at the turn of the 20th century, was once that country’s richest man. “Jenkins was the precursor of today’s Mexican plutocracy, and hence the Carlos Slim of his days. Crony capitalism is as current today as in Jenkins’ era,” Andrew Paxman, author of  “Jenkins of Mexico: How a Southern Farm Boy Became a Mexican Magnate,” told me.

Officially published Monday by Oxford University Press, “Jenkins of Mexico” is an engaging 509-page biography of an American with humble origins who mastered the art of navigating Mexico’s byzantine and often corrupt political system to build an extraordinary business empire in a divided country coming out of the 1910 Revolution. Headquartered in the central Mexican state of Puebla, Jenkins’ conglomerate included textile mills, sugar plantations, real estate, banks, and a movie theater monopoly.

“Both men owed their rise to two basic factors: entrepreneurial drive and knowing the right people,” said Paxman, a business historian at the Center for Research and Teaching in Economics (CIDE) in Mexico City. Paxman’s long-term project is also to write a biography of Slim.

Slim has many things in common with his predecessor. Both were innovators, gifted with numbers, intelligent, risk-takers, family centered-men, philanthropists, controversial with a reputation of exploiting workers and being puppet-masters of politicians. They had dreams of building business empires and had the skill to realize them.

From Paxman’s scholarly research one can derive that Jenkins is the putative “grandfather” of several Mexican billionaires today. Like Jenkins, today’s billionaires also embraced U.S.-type capitalism through entrepreneurship and monopolistic practices, fearless individualism, and cozy deals with power brokers.

Jenkins and Slim, who was 23 when Jenkins passed away in 1963 in his beloved Puebla, never met. But, as “Jenkins of Mexico” shows, there is a “business genealogy” that links them. That link was Manuel Espinosa Iglesias, Jenkins’ right-hand man, and Slim’s friend. Espinosa Iglesias was the majority owner of Mexico’s leading bank when the banks were seized by the government in 1982. In 1985, Espinosa Iglesias sold off his insurance company and other firms to his friend Carlos Slim and devoted himself to philanthropy.

Paxman describes that as Jenkins was cementing his position as “magnate of magnates” in the 1940s, he acted as a mentor to Espinosa Iglesias. Espinosa, the richest Mexican of the 1970s, in turn, became “something of a mentor” to Slim.

“Both Jenkins and Slim evinced a talent for buying at bargain prices… Both became masters of monopoly. And both, it seems, [were] adept at protecting and expanding their monopolies through political ties.” While the book documents beyond doubt Jenkins’ financing of a known political family that produced a President and a state governor, Slim’s cronyism with Mexico’s political class remains a “matter of conjecture and conspiracy theory more than documented fact,” Paxman cautions.

Jenkins and Slim also share a strong personal devotion to their late wives. Jenkins never remarried after his wife’s early death. According to “Jenkins of Mexico,” he visited her grave every day to read aloud to her. In 1954, ten years after her death, Jenkins publicly honored her memory by setting up the Mary Street Jenkins Foundation. With $7 million in assets, the foundation was probably Mexico’s largest private charity at the time, Paxman says. Jenkins also co-founded two universities and funded projects to help Mexico’s poor.

Slim, whose wife passed away in 1999, has not remarried. To honor her memory, Slim founded the Soumaya Museum, a non-profit art museum in Mexico City known for its flashy façade. Slim also funds medical research on kidney disease, the cause of his wife’s death.

After Jenkins’ death in 1963, Espinosa Iglesias became chairman of the Mary Street Jenkins Foundation. Despite having five daughters and an adopted son (his own grandson), Jenkins willed his fortune to the foundation. With an endowment of some $750 million, the Jenkins Foundation remains one of Mexico’s largest charitable foundations.

Jenkins was reportedly worth $80 million a the time of his death. According to Paxman, in today’s money that’s $650 million. “Not at the Forbes Billionaire list level, but then the Mexican economy was much smaller than today,” Paxman explains.

Asked if he expects Jenkins’ generosity to inspire Slim to leave his fortune to philanthropy, Paxman said: “No, Slim certainly won’t do that. He wants to leave his empire to his sons, sons-in-law, and grandsons.”

Jenkins’ and Slim’s nationalities determined to some extent how they are perceived today by Mexicans. Slim, a Mexican of Lebanese descent, is often projected as the living face of crony capitalism, but his Mexican critics say that at least he is “our capitalist.” Jenkins, on the other hand, is partly credited with giving rise to the type of anti-Americanism that has reemerged in Mexico thanks, in part, to anti-Mexican statements made by U.S. President Donald Trump.