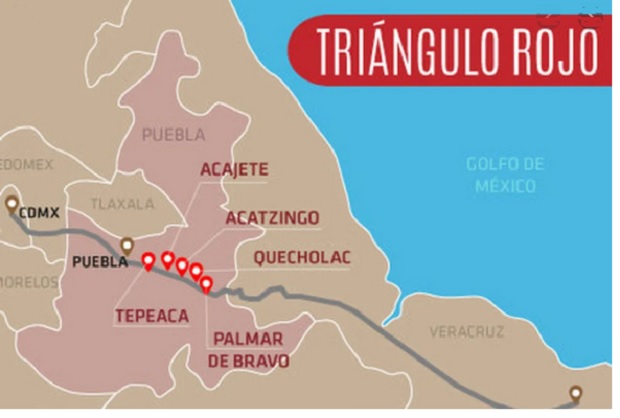 The Petróleos Mexicanos (Pemex) pipelines that transported fuel in the Minatitlán-México section are in disuse, but they cross an area of ​​the state of Puebla known as the “Red Triangle”, where criminal gangs have stopped the “huachicoleo” to focus on theft from carriers.

The unused space of the pipelines would currently be used to hide stolen merchandise on the highway. The criminals would have adapted these places to unload goods from stolen trucks. “It is a completely fenced terrain with fences of five or six meters high and they have a kind of basement parking so that the helicopter or drone does not identify that there are two or three trucks with stolen merchandise below,” a transport leader with an anonymous identity denounced to the program En Punto.

Once the security agents have left the area, the criminals remove the merchandise from the basements and transfer it to another location. Trucks, on the other hand, are dismantled once they run out of cargo, the man told En Punto journalists.

The Red Triangle is the area comprised of the municipalities of Acajete, Tepaca, Tecamachalco, Acatzingo, Quecholac, and Palmar del Bravo. There, criminal groups were attracted by the operation of the oil pipelines and began to engage in fuel theft (huachicoleo).

The escalation of the “huachicol” in the state began in 2012, but in the following years 34% of the gasoline stolen from the country would be extracted from the Minatitlán-Mexico stretch, according to the GIS System, Special Data Analysis and Location Platform .

Puebla became the center of fuel theft, only between 2011 and 2015 clandestine intakes increased 91%, according to Pemex figures. In those years, more than 600 clandestine shots were registered and the Red Triangle concentrated up to 66% of this crime, according to Sigsa.

Later, the pipelines were disabled and used by organized crime to create the “basements” that would hide the merchandise stolen from the truckers.

The main point of the robberies is currently the municipality of Tecamachalco, where the state government was forced to take control of security to address the problem in October 2020.

According to what General Gregorio Arroyo, colonel of the XVIII National Guard Battalion, told various local media those who carry out these activities are local criminal groups that operate in the vicinity of the highway. He stressed that this municipality is located in the central part of the Red Triangle and has become an area of ​​attention for the government.

However, the Secretary of Security of Puebla, Raciel López Salazar pointed out in a virtual conference that Antonio Valente Martínez, alias el “Toñín”, one of the main huachicolero leaders of the state, is now the leader of the criminal group dedicated to robbing the transportation units.

On February 4, the Government of Puebla concluded with the renewal of the strategy to face the theft from the motor transport of cargo, rail, and fuel. A strategy coordinated by the State Attorney General’s Office (FGE), the Public Security Secretariat (SSP), and Pemex.

The state government assured that they have managed to weaken criminal gangs in the area and highlighted those cells led by individuals identified as “Grillo”, “Patrona”, “Sureños Crazy”, “Los Angelinos 13”, “Toñín” and “Los Chilangos”.

Despite this situation, transporters have spent the last three years dealing with the increase in robberies on the highway and constantly denouncing the criminal acts of which they are victims.