The positions regarding the presence of the Army in the streets, the relationship with Donald Trump or the role of the national and foreign press are the ones that have caused the most stir in the last two years

For several years before becoming president, Andrés Manuel López Obrador has been characterized by his harsh accusations of the mismanagement of the country’s administration by previous governments, as well as public condemnations of the acts that he has branded corrupt. , unjust or treason.

Before the mornings it was Twitter. For more than a decade (he joined that social network in 2009) that was his platform of expression, the trench from where he issued his judgments, for the government and his opponents.

Varied opinions that ranged from the remittances sent by compatriots abroad to the use of the Army in the streets imposed by past administrations, to the accusations of xenophobia in Donald Trump’s sayings about Mexicans, when only in 2016 he won the elections presidential elections.

The same positions that, since he became president, have become contradictory, being opposed to what the Mexican president himself thinks today. At least five posts that AMLO made on Twitter, Before assuming the presidency, they make it clear.

The militarization of the streets

One of the most notorious contradictions has been the position of the Mexican president on the presence of the Army in the streets.

And it is that while in February 2013, with Enrique Peña Nieto as president, AMLO pointed out as “perverse” that the military was used to deal with the problem of insecurity “That they created by looting”, in March of this year, already as an agent, decreed the presence of the Armed Forces in the streets of the country until 2024, as a reinforcement of the security guard for the National Guard policemen.

The Reformation and the foreign press

Several traditional national media, and many other renowned international media (if not all), have been openly, directly, and harshly criticized by President López Obrador during the 24 months that his government has been in office.

For example, his well-known sayings to the national Mexican newspaper Reforma, which he has called “filthy pasquín” –an expression used to describe a journalistic medium with a precarious circulation and/or despicable content–,“Prensa fifí”, “conservative newspaper (opposed to its ideological trend)”… and has exposed his columnists as “chayoteros“, an expression that refers to journalists in past times received money from the rulers.

But in 2015 he used a poll from that medium as an argument against then-president Enrique Peña Nieto. ” The Reforma survey reveals the EPN debacle, but the most worrying thing is the astonishment of the political class at the crisis in Mexico,” López Obrador tweeted in July of that year.

“(…) What is the characteristic of these newspapers? Frankly speaking, they are also taken by large international economic and financial corporations. It is a decadence also expressed in the world’s media” Said the Mexican president last May about media such as the Wall Street Journal, New York Times, Washington Post and Financial Times, after in different articles said publications pointed out that the Mexican government reported misleading figures on the number of infections and deaths from COVD-19.

However, the same case is presented as with the Reformation: in 2013, as in 2016, there are a couple of tweets in which AMLO argues for WSJ and NYT publications, respectively, to demand explanations or support accusations against the governments in turn.

Remittances, the economic lifeline of the pandemic

In March 2016 (Peña Nieto’s term), López Obrador condemned that the national economy was so bad that many regions of the country only survived on the basis of remittances sent to Mexico by fellow citizens abroad.

But in 2020, given the economic crisis that caused the scourge of the new coronavirus pandemic in the country, AMLO changed the speech. Now he considers “a social miracle” and an “extraordinary fraternity of the Mexican people.”, the shipment and rebound of the income that Mexicans send in other countries, especially in the United States. That is, nowadays he no longer sees a government failure to have such a great dependence on remittances.

Donald Trump, from non grato to being a friend

The difference in his statements regarding the outgoing president of the United States, Donald Trump, has been one of the most notable during this 2020.

In January 2017 Andrés Manuel demanded to sue Trump for human rights violation after the American warned: “if Mexico is not willing to pay for the wall, it would be better to cancel the next meeting (one that it would hold with EPN)”, which was scheduled for the end of that month, and which was effectively canceled. 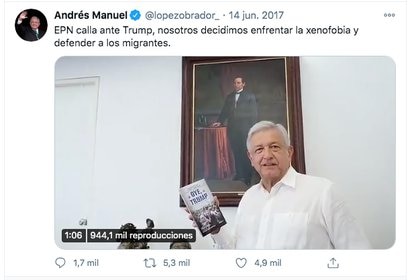 But this year López Obrador made his first – and so far only – visit abroad as president to Washington, in response to an invitation from Donald Trump. Now, when questioned by the insults of his counterpart about Mexicans and about the border wall that until the last moment of his mandate he has sustained, the Mexican president limits himself to arguing politics and diplomacy as a means of good communication.

In addition, López Obrador who even published a text against the US president (Hey, Trump) now considers him his friend.

The times of the matches on radio and television

And another incongruity is portrayed in the issue of advertising times of political parties on radio and television. Now, in the context of the pandemic, the president has called on the parties – facing the 2021 electoral process – to give up their spaces to the dissemination of information on the behavior, figures, and vaccination process of COVID-19.

But in 2015, AMLO was quite energetic in denouncing a proposal from the Green Party that put on the table the possibility of taking away the gratuity to the times granted to the parties for their publicity and start charging them. 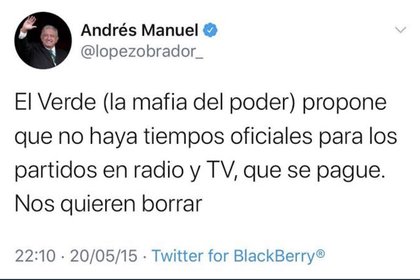 López Obrador and the foreign press: the president’s contradictions

In 2016 he recognized the work of the New York Times; now he describes it as a “famous but unethical newspaper”

The COVID-19 pandemic has intensified one of the constant controversies of the current administration: disagreement with the international press.

“These privileged (business sector) launch a campaign to discredit our government. Since misinformation in the Mexican press no longer gives them, they have now turned to newspapers in other parts of the world, famous newspapers, the Wall Street Journal, the New York Times, the Washington Post, the Financial Times. What is the characteristic of these newspapers? Frankly speaking, they are also taken over by large international economic and financial corporations. It is a decline also expressed in the world’s media, ”declared President Andrés Manuel López Obrador this week during one of his usual morning lectures.

The reason: these media have published different journalistic pieces that refer to the fact that the Mexican government hides figures or lies about the real number of positive cases and deaths from the new coronavirus.

In fact, it is not the first time he has lashed out at the foreign press. On other occasions he has shown his disagreements with the content they publish about his government.

But it has not always been this way.

For example, precisely about The New York Times he tweeted in 2016: “They continue to ignore EPN abroad. Today the New York Times returns to criticize him in an editorial for his complicity in Ayotzinapa ”.

So what has changed your opinion about the foreign press?

For the political expert, José Antonio Crespo, the answer is quite clear: “ López Obrador cannot accept criticism based on arguments. Any criticism, inside or outside (the country), must always be classified as a conspiracy; they are corrupt, they are protecting privileges, they will no longer be able to steal; they are the conservatives who want to overthrow my government. And he always sees it with an ideological or moral character. It cannot accept that there may be a criticism based on arguments that would have to be answered with arguments, “he toldInfobae Mexico.

The specialist emphasized that “the (international) press is doing its usual job: sometimes they have spoken out in favor of some policies of Mexican presidents. “ He gave as an example the case of former President Peña Nieto. How he was praised outside the country for his structural reforms, but he was also criticized negatively for corruption scandals and poor security results during his rule. 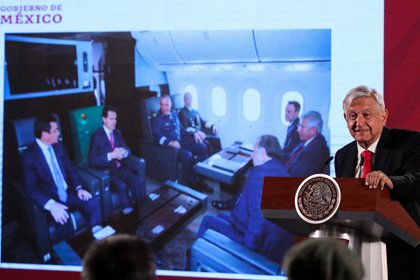 For his part, also a political analyst, Abraham Mendieta, exposed Infobae Mexico a different approach: “I consider that the problem is not against the media.”

” I do not think it is a problem for the international press, I think they attended to the situation of a column (that of the NYT) that could be juicy in terms of traffic and allowed a poorly supported text to enter public diffusion, and well they are media that always have a major buzz “.

Mendieta considered that there are media that have been responsible, in most cases, for what they are accused of, for example, by publishing little very poorly supported pieces. In addition, he added that there are large media that become spokespersons for their sponsors: “The president has the right to criticize when a medium does serious journalistic work and when he considers that a medium does not. “

During his most recent statement on the subject, AMLO spoke specifically about his position before the Spanish newspaper El País: “It was the newspaper and continues to be, that defended Spanish companies that did business in Mexico, so one day yes and the other also questions us ”.

Does the president contradict himself?

“The press, anywhere in the world, must be independent, away from economic power, political power and always close to the citizens, the people, the truth,” the Mexican president also stressed in his “morning” conference on Monday. .

The above could be summed up in a simple term: freedom of expression .

The United Nations Universal Declaration of Human Rights also manifests itself on this: “Everyone has the right to freedom of opinion and expression; this right includes the right not to be disturbed because of their opinions, to investigate and receive information and opinions, and to disseminate them, without limitation of borders, by any means of expression ”.

However, the Mexican president leaves a certain impression that the media only seem objective and impartial when they speak out in favor of his government. And it is that López Obrador has also referred that there are few media that currently carry out journalism adequately; coincidentally, they are those who have spoken in accordance with their behavior.

“All the media have their sponsors and their owners. That is not bad. And in that sense, they defend specific agendas. There are notes of greater rigor, which are critical, that are worth paying attention to. And there are also notes that evidently obey a political slap with transnational and economic interests, and that is also good, it is part of the game of a democracy, ”Abraham Mendieta added in this regard.

For José Crespo, it is also normal that there is no ideological coincidence of these newspapers with López Obrador and he points out that this is what plurality is for since the media tend to see things from the perspective of their own ideological position. But it does not mean that they are specifically in cahoots against the Mexican president.

“One would have to ask, who could organize and put this press in agreement? Who agrees with the international press? They are doing their job; they have their correspondents here who realize what is happening ”, he concluded.