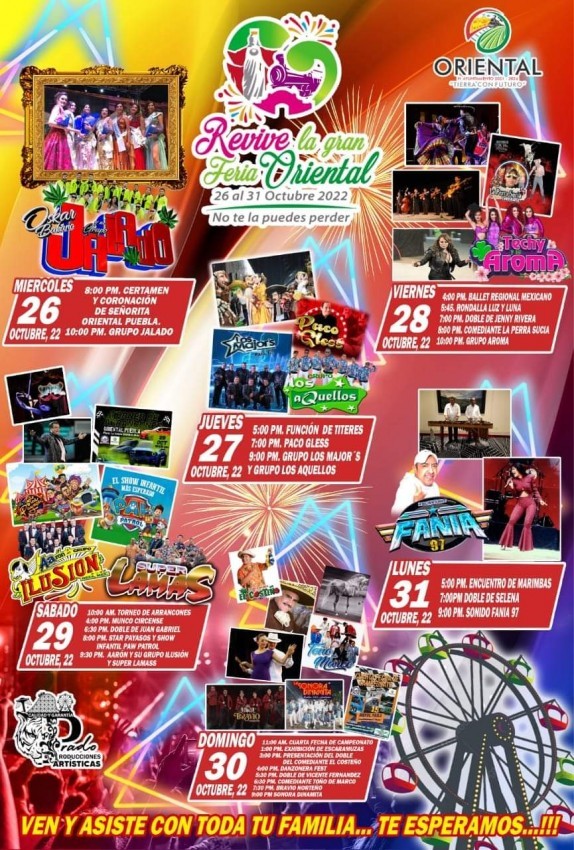 If you are near the Sierra Norte de Puebla from October 26 to 31 , do not hesitate to visit the Feria de Oriental, Puebla, 2022

The entity from Puebla is already preparing itself with the best of its traditions and an interesting entertainment proposal to conquer thousands of smiles from its visitors.

Being one of the most anticipated parties in the region, people from nearby places are already getting ready to go in search of fun. During the holidays, entire families will arrive from places like Libres, Tepeyahualco and San José Chiapa.

As if that were not enough, when you visit this beautiful corner you can also enjoy some of its tourist charms. Highlighting tours of wheat farms such as San Antonio Virreyes, Zacatepec and Santiago Texmelucan, as well as the Alchichica lagoon or the Cantona Archaeological Zone.

As for the attractions of the festival, it will take place between mechanical games, exquisite cuisine, crafts from the region, children’s shows, among other artistic and cultural activities that take place within the framework of the famous event.

The musical proposal also transcends as one of the charms of the Oriental Fair , since an artistic billboard that summons renowned groups has already been confirmed.