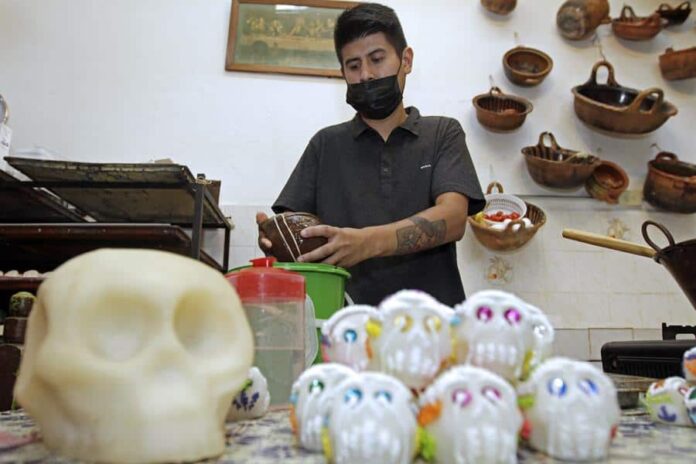 For five generations, the Quintana family in the state of Puebla, central Mexico, has preserved the tradition of making the sugar skulls that decorate offerings and altars on the Day of the Dead in Mexico, a tradition that is celebrated in this country on the 1st and November 2.

Due to their colors and their craftsmanship, the sugar skulls are unique in the world and a key point is that they must bear the name of the person who is remembered in the offering, a kind of tribute full of food, drink and other tastes, where “the arrival of souls” is expected in the world of the living.

The placement of this figure, made with basic products such as sugar, water and vegetable colors, is a tradition that dates back to pre-Hispanic times and is still rooted, although it has also been made with chocolate for decades.

For more than 100 years, the Arte Mexicano El Colobrí business, located in the state of Puebla, has been dedicated to the elaboration of these handicrafts, which are manufactured at high temperatures, with a copper pot and clay molds.

Ernesto Quintana Reyes, an artisan of typical sweets, told EFE that he belongs to the fifth generation of his family that works with this product to keep the tradition alive.

Although he said that it is an “easy to make” sweet, it can take up to four days to make it due to the steps that must be followed, in addition to the drying process, to prevent damage.

He revealed that annually they manufacture some 25,000 skulls, which are mostly exported to Spain and Germany, so they begin their production in June in order to meet orders.

HOW ARE THEY MADE?

The first step is to place sugar in a copper saucepan and pour water so that it can boil for approximately 15 to 20 minutes at a temperature of 110 degrees.

Subsequently, to find out if it has the necessary consistency to begin its preparation, the “ball test” is carried out, which consists of taking the mixture and placing it in cold water.

Once ready, it is poured into clay molds that were previously submerged in water to achieve a perfect cooling of the product and they can be unmolded.

According to Quintana Reyes, this is the fastest process, because once the molds are filled, two or three minutes must pass and the removal of the molds can begin so that a white skull remains.

Then the decoration begins, where the forehead and eyes are first placed, that is, colored paper is glued to the top of the skull, as well as round pieces of paper that are placed in the holes that simulate the eyes.

And the last step is the one that gives life to the skull, which is the decoration with duyas made with small plastic bags, where a mixture of sugar with vegetable colors is poured and the skull begins to be colored.

Once finished, they should be dried at room temperature to prevent them from breaking when packed.

Colorful and cheerful, the candy skull is one of the most iconic crafts in Mexico and the tradition of the upcoming Day of the Dead.