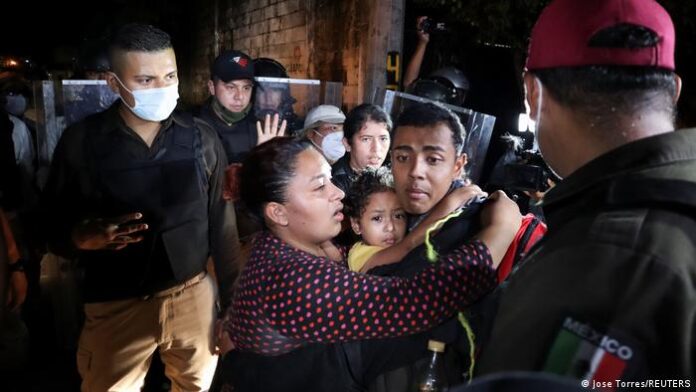 Migrant smuggling groups station themselves in Chiapas, Tabasco, Veracruz, Oaxaca, Puebla, and the State of Mexico as an intermediate stop on their journey to the US.

A total of 688 migrants, mostly Central Americans, were found in two different actions in the Mexican state of Puebla, in the center of the country, the National Migration Institute (INM) reported this Saturday (08.13.2022).

In the two immigration verification actions, foreigners were found in overcrowded conditions. In a statement, the INM, dependent on the Secretariat (Ministry) of the Interior, pointed out that 567 migrants were found in the Parador El Conde car hotel, located near the border with the state of Tlaxcala.

The groups of migrants, who were traveling crammed inside the dry box of two trailers, were found thanks to an anonymous call, while four men, allegedly human traffickers, were arrested, according to the source.

In the other action, 121 migrants were found in a bus that was traveling on the Orizaba-Puebla highway and were detained for a routine check.

INM Puebla explained that the discovery was made in collaboration with agents from the Secretary of National Defense (SEDENA), the National Guard (GN), the State Police, and agents from the Attorney General’s Office (FGR), who identified the foreigners with irregular migratory status.

Despite the tightening of surveillance on Mexico’s southern border, thousands of migrants from Central and South America, but also from Cuba, Haiti, and various African and Asian countries enter Mexican territory with the aim of reaching the United States.

Migrant smuggling groups seek out routes for foreigners, sometimes stationing themselves in the states of Chiapas, Tabasco, Veracruz, Oaxaca, Puebla, and the State of Mexico as an intermediate stop on their journey to the United States.