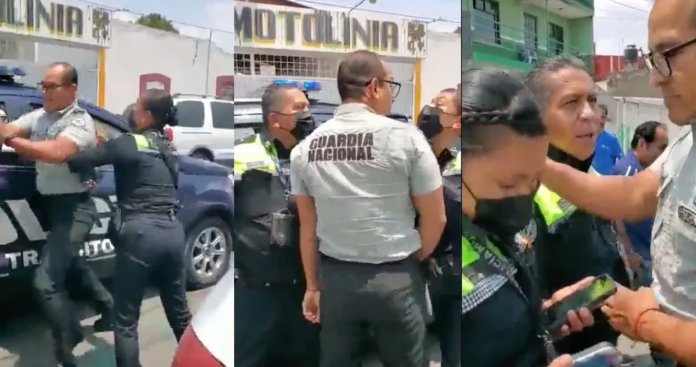 An agent of the National Guard was captured on video at the moment in which he attacked two elements of the Secretariat of Citizen Security in Puebla because they stopped him for a traffic violation.

The events occurred this day on Calle 14 Oriente at number 2828, in the Humboldt Norte neighborhood, when the agents tried to infract the element of the National Guard and he refused to receive a fine.

The National Guard agent was badly parked with an Audi A3, with plates from Mexico City, and did not accept the fine or have his plates removed, so he began to attack the two municipal uniformed officers.

In the video, you can see how the two Municipal Transit agents, a man and a woman, were attacked by the uniformed National Guard, who pushes and hits them while yelling at them and trying to subdue them.

According to sources from Periódico Central, the member of the National Guard was identified as Cristian Varela Parraguirre. He is known among his peers for being extremely violent in addition to conducting illegal activities.

As Periódico Central reported, the military command has gained strength in Puebla. As of April 1, the military command of the National Guard assumed control of the highways and federal roads of Puebla. In order to relieve the civil agents who previously belonged to the extinct Federal Preventive Police.

In addition, the civil commanders received orders from the National Guard for the military command to take over the supervision and patrolling of federal toll booths, highways and highways, the Puebla International Airport and the spaces considered priorities for the Federation as of this first day of April.

The video ran freely on social networks throughout this Monday. Given the facts and criticism, the National Guard issued a statement stating that the subject is not an active member of the corporation since he was discharged in June 2021.

The federal corporation will file a complaint about the probable commission of the crime of usurpation of functions and whatever results.