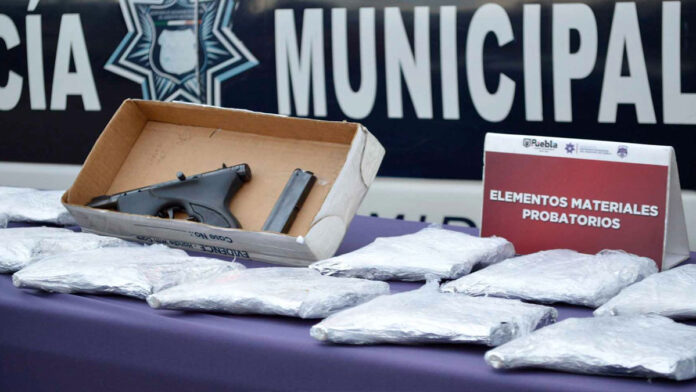 They arrest a young man with 19 weapons after being sniffed by a dog.

In Puebla, a young man was arrested with 19 weapons after being sniffed by a dog at the bus station; the subject wanted to go to Mexico City (CDMX ).

What is known of the young man with 19 weapons in Puebla?

A man identified as Alfredo “N” was arrested for illegally carrying 19 Czechoslovakia-type firearms. The person intended to travel to Mexico City, but one of the dogs at the Puebla bus terminal began to show strange behavior when it sniffed at the individual, who, they assume, belongs to a criminal group or could be a black market dealer. .

The 20-year-old man also carried marijuana, a situation that put the canine unit on alert . When the police did a more thorough search, they discovered that the young man was carrying all 19 weapons.

“Municipal police, assigned to the K9 Group, were carrying out surveillance tasks in the corridors of the bus station, when they noticed that a canine specimen specialized in the detection of narcotics modified its behavior in front of a luggage, owned by a male. Consequently, the elements approached towards the male ”.

The man, along with the 19 weapons and the drug, was left at the disposal of the Public Ministry, which will investigate the relationship of the young man with this crime.

According to a report by the SSC, from October 15, 2018, to September 15 of this year, municipal forces have removed from the streets of Puebla capital about 560 firearms and more than 11,700 useful cartridges.