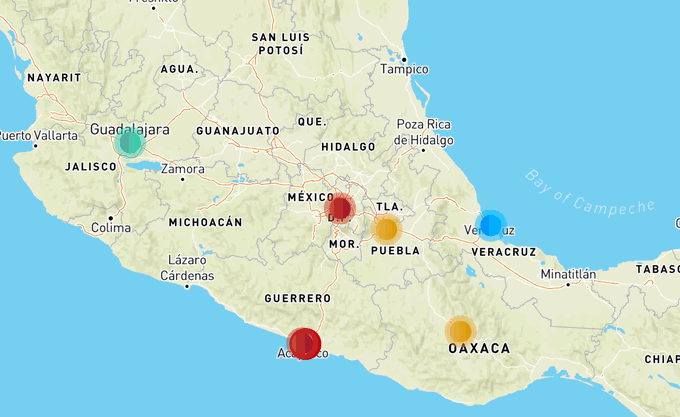 Update: An official report from the National Seismological Institute indicates that the earthquake had a magnitude of 7.1Update: at 9:24 pm aftershocks with a preliminary magnitude of 5.2 were reported, with the same epicenter, Acapulco, Guerrero.

At 8:47 p.m. an earthquake was recorded in Mexico considered severe and was reported in Mexico City, Morelos, Puebla, Oaxaca, Michoacán, Hidalgo, the State of Mexico and Jalisco.

The National Seismological Service confirmed that the earthquake was of magnitude 7.1 and was located southwest of Acapulco at 8:47:47 p.m.

For its part, the SkyAlert service classified the earthquake as “severe.”

The SafeLiveAlert app shared a map showing the expected intensities in different areas of the country:

The USGS Earthquakes account indicates that in its preliminary data the earthquake is 7.4 and originated in Pueblo Madero

Civil Protection carries out a preliminary assessment of the area where it was presented, noting that it was registered 14 kilometers southeast of Acapulco. Clarifying that the generation of a Tsunami is not expected .

For its part, SkyAlert mentions that there is a risk of a Tsunami due to changes in the sea level detected.

SkyAlert reports that the notification of the earthquake was made up to 66 seconds in advance in Mexico City.

So far no serious damage has been reported in CDMX

Claudia Sheinbaum, head of government of Mexico City mentioned that the review protocols were activated after the earthquake.

He added that he is already flying over Mexico City and so far no serious damage has been reported.

Omar Garcia, Mexico City’s secretary of security, reiterates that there is no relevant damage in the capital, although there are some neighborhoods without electricity.

Regarding the Mexico City metro, it was confirmed that they are operating normally after carrying out a review protocol.