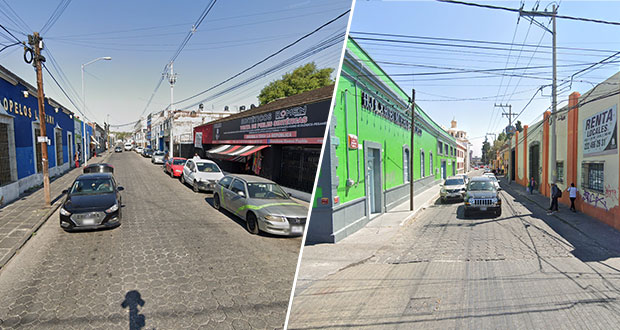 The 12 works that the Puebla City Council will carry out, including the remodeling of 16 and 18 Oriente-Poniente, with the 160 million pesos that it will request as a credit line, will begin in October and would be ready in May 2023.

This was reported in an interview by the head of the Ministry of Mobility and Infrastructure, Edgar Vélez Tirado, who said that the start date of the projects is October 3, after which there will be a maximum of ten months, however, he foresaw let them be seven.

He said that in the case of Calles 16 and 18 Oriente-Poniente, in the Historic Center of Puebla, it is estimated that it will be between four and six months, where the hydraulic infrastructure and the restitution of the cobblestone will be intervened, so it will not be new.

He recalled that these two roads are in the section from 11 Norte to 5 de Mayo Boulevard; It is estimated that in others, such as 8, 10, 12 and 14 Poniente, the Agua de Puebla company will be in charge of replacing drainage and drinking water.

He explained that in total, of the 12 projects, seven are for drinking water and drainage, which include two wells in auxiliary boards, while the other five are re-lamination of streets.

He explained that in 16 and 18 Poniente, it is because the intervention of two streets is urgent and Agua de Puebla is waiting for the authorization of a line of credit to be able to carry out the actions that are required in the first square.

The secretary emphasized that the municipal government has the obligation to attend to drainage and drinking water , so this action will be independent of the work carried out by the Agua de Puebla company in another area of ​​the Historic Center.

It is worth remembering that it was last Friday when in a Cabildo session it was approved that the Municipal Treasury initiate the process to acquire the line of credit for 160 million pesos, for which five banks will be invited and one of them will be chosen.

Still without starting work in the Amalucan market

Regarding the Amalucan market, Vélez Tirado stated that they are waiting for the Market Directorate to dialogue with the works in the property, this after the ruling was given to the winning company of the bidding.

He argued that the market negotiation “should be done now”, for which he anticipated that the negotiations will begin with the works, as it is an instruction from President Eduardo Rivera Pérez, so that it is ready before the end of the year .

“We are only in charge of the work, the indication is that when we have the light I will see that they agree, let’s start, the work is very firm and we have to carry it out, it has to be done now, “he said.

As part of the Master Plan for the Central de Abasto, the Puebla City Council headed by Eduardo Rivera Pérez, handed over the park and the field for visitors and workers of this important commercial space in the capital of Puebla.

“I am very pleased that today we can deliver a beautiful soccer field, that we can have spaces to eat, that we can rescue the green area,” were the words with which the mayor highlighted the importance of such a commercial area It is important for the municipality to have optimal spaces for its inhabitants and visitors.

To fit out this sports and recreation area, 7.5 million pesos were invested, rehabilitating: 517 square meters of the sports field, 2,488 square meters of green areas, 581 square meters of paving, and the improvement of sidewalks, corridors and living area; all this for the benefit of more than 40 thousand people.

For his part, Councilman Manuel Herrera Rojas, President of the Commission for Economic Development and Tourism, pointed out that only five months ago this space was full of garbage and could not be used, but with conviction and joint work it was possible to have this decent space. for the workers of this shopping center.

Paul Villafuerte, a street trainer from Barras Praderas, was also present at this installment. spaces suitable for carrying out all kinds of sports activities.

Also attending this ceremony were councilor Gabriela Ruíz Benítez, President of the Health, Public Assistance, Vulnerable Groups and Persons with Disabilities Commission; Secretaries Jorge Cruz Lepe of the Interior and Edgar Vélez Tirado of Mobile and Infrastructure; Antonio Iriarte González, Director of the Municipal Sports Institute, as well as tenants of the Central de Abasto.