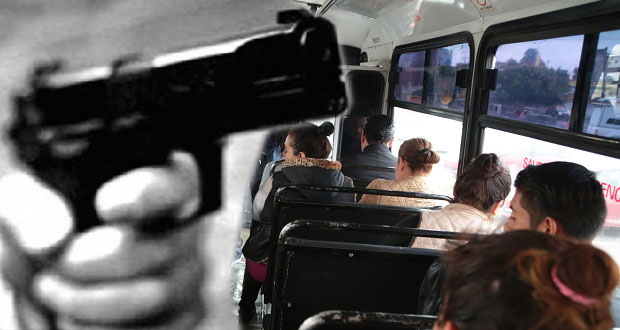 Many are the videos that circulate on social networks about assaults on public transport in the State of Mexico. The last one was registered on the Mexico-Pachuca highway, where a couple of men threatened three users, took their belongings from them, and then warned the driver to flee, under the argument of “we don’t want to kill you.”

The men stopped a van, but instead of boarding to continue on their way, they used firearms to threaten the passengers, who had no choice but to hand over their belongings.

One of the users experienced moments of panic when he tried to open his backpack, but he was directly pointed with the weapon and his reaction was only to put his hands to his face in panic.

The videos that circulate on social networks about assaults on public transport in the State of Mexico (Photo: Screenshot)

Once the robbery was over, the criminals got out of the unit, faced the driver and warned him: “We don’t want to kill you, pull yourself up, dog,” and immediately closed the unit’s sliding door.

Assaults on public transport in the State of Mexico

According to the Executive Secretariat of the National Public Security System, the State of Mexico is actually the state with the largest number of investigation folders or complaints for criminal public transport robbery so far in 2021.

The figures in the table of criminal incidence of the common jurisdiction have been increasing since January when 502 complaints were registered, and although it fell to 498 for February, in March there were 638 complaints, until October, the most violent of all, with a total of 702 assaults on public transport users.

The State of Mexico is actually the state with the largest number of investigation folders or complaints about criminal public transport robbery so far in 2021 (Photo: Screenshot / Twitter @vialhermes)

In total, up to November 20, 2021, the Secretariat’s latest information cutoff, there are 6,097 assaults registered in units, of which at least 5,605 were reported with violence, while 492 were identified without violence.

But the figures continue in individual public transport, where a total of 896 assaults have been reported up to the same cutoff, 894 of them violence and two without violence. The month with the most complaints was May with 117 robberies, followed by June with 107 and a new rise in July with 109 robberies.

In other words, the State of Mexico accumulates more than 50% of the national total of assaults on collective public transport. According to the figures, the country accumulates 10,561 complaints in this category of the crime of theft. A minimum of 7,563 robberies were with violence and 2,998 were without violence.

The numbers of the periphery of the center of the country can only be compared with those of Mexico City, where the accumulated figures for the year indicate a total of 3,099 assaults on collective public transport. Of the robberies, at least 1,263 were with violence and 1,863 without violence. The entity ranked second.

Two armed men assaulted a transportation unit in the State of Mexico.

In the third place appears the state of Puebla with 335 robberies, where 231 were evidenced by violence; Querétaro follows with 258 incidents reported up to October; Jalisco with 282 assaults on collective public transport, of which 48 were violence and 234 were non-violent; Oaxaca also appears with 123 robberies in the same category, only 68 with violence;

The following states of the Mexican Republic did not even reach figures of 100 assaults, with states that even counted zero investigation folders.