Sergio Perez secured his first ever Formula One win in a thrilling Sakhir Grand Prix in Bahrain on Sunday.It has taken Perez 190 starts before securing victory, which finally came in a highly entertaining race that looked to be going the way of George Russell, another driver chasing a maiden F1 win.

Russell switched from his usual Williams to Mercedes after Lewis Hamilton tested positive for Covid-19 earlier this week and opened a commanding lead after jumping ahead of teammate Valtteri Bottas on the first turn.But the 22-year-old had to pit twice late on — first when his team informed him the wrong set of tires had been put on his car and then again when he suffered a puncture — to rob him of victory.

Russell’s bad luck was Perez’s gain. The 30-year-old Perez is without a team for next season having announced in September that he would be leaving Racing Point despite signing a three-year contract in 2019.It proved to be a stunning day for Racing Point, too, with Lance Stroll finishing third — the Canadian’s third podium and the team’s first-ever double podium. 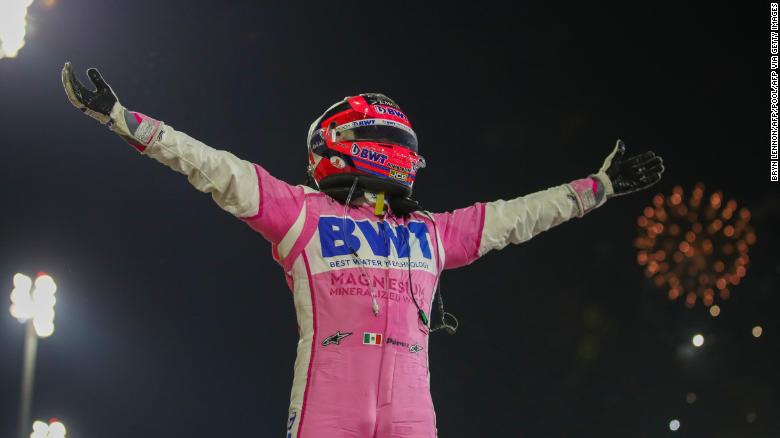 “I’m speechless, I hope I’m not dreaming,” Perez said after the race.

“Ten years it took me. Incredible … I don’t know what to say … the luck hasn’t been with us this year but we’ve finally got it and I think we won today on merit.”Now facing a season without a team, Perez is confident he still has a future in the sport.”It just gives me a bit more peace with myself, to be honest,” he said of the win. “What happens is not so much in my hands at the moment, but I know I want to keep going. If I’m not in the grid next year, I will be back in 2022.” 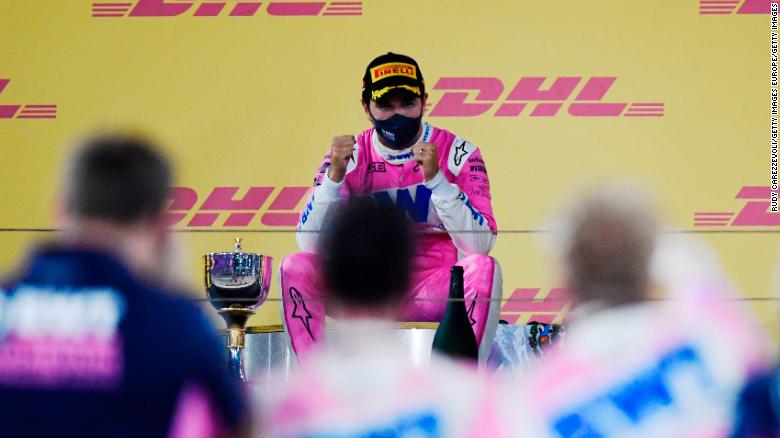 Perez sits atop the podium at the Sakhir Grand Prix in Bahrain on Sunday, December 6.

The victory was even more remarkable given Perez had dropped to the back of the grid after an incident involving Red Bull’s Max Verstappen and Ferrari’s Charles Leclerc on the fourth turn of the first lap.Both Verstappen, arguably the pre-race favorite, and Leclerc were forced out of the race after the collision, but Perez rallied and quickly started gaining places through the grid.And when Mercedes chose to pit both Russell and Bottas during a safety car period, Perez moved into the lead. 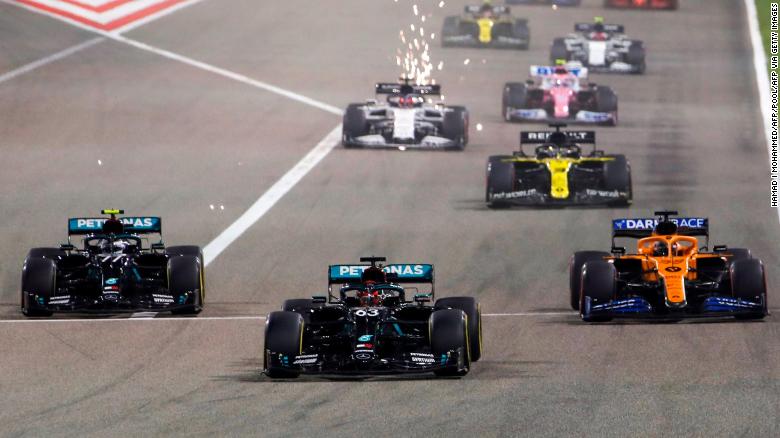 George Russell, center, led for much of the Sakhir Grand Prix.

He was under pressure from a charging Russell in the closing stages, but the puncture cost the Briton and saw him drop to the back of the grid.In a disappointing race for the usually dominant Mercedes, Russell eventually finished ninth — his first championship points in F1 — while Bottas finished eighth.

The F1 season, which has already seen Hamilton crowned world champion for a seventh time, concludes in Abu Dhabi next weekend.

Romain Grosjean, who escaped his burning car after a dramatic crash at last week’s Bahrain GP, will miss the final race of the season after returning to Switzerland to continue treatment for burns he sustained.

“For my health and safety, it is better I don’t take the risk to race in Abu Dhabi,” Grosjean said in a video posted on social media. “It is a very difficult decision, but it is the best one for my future.”