“No Love, No Tacos” is the accidental slogan of a Mexican restaurant in Iowa after a social media post by its owner went viral.

A Mexican restaurant in a small town in Iowa has wrapped itself in the middle of political discourse after some customers of the popular eatery took offense to a yard sign the owner placed outside.

The sign advocated equality and social justice, but some found it too politically correct and wrote letters to the owner, Alfonso Medina. Instead of taking it down, Medina placed a much bigger one using only four words and accidentally started a movement about love, tacos and politics.

La Carreta has been serving Mexican food for 20 years in Marshalltown, a small community about 50 miles northeast of Des Moines. Medina took over the family restaurant business a couple of years ago. His parents migrated from Mexico more than three decades ago and he was born in Iowa.

“Made in Mexico, delivered in the US,” he said.

The restaurant has stayed open during the pandemic and its employees stayed on the job since Iowa is one of a handful of states that never shut down businesses completely.

“We’ve been lucky to have great support from the community,” Medina said. 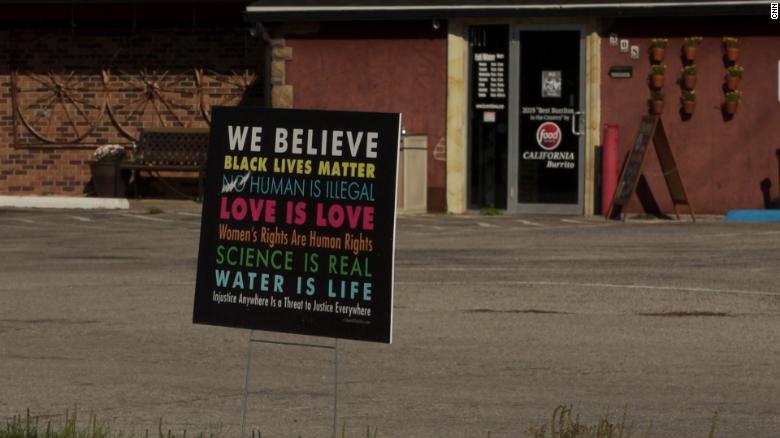 The original sign outside La Carreta Mexican Grill that upset some of Alfonso Medina’s customers.

But things got interesting in August, when Medina placed a small black sign with rainbow letters at the entrance of the parking lot that said: “We Believe Black lives matter, No human is illegal, Science is real, Women’s rights are human rights,” and a few other things.

“I didn’t think there was anything bad,” he said, admitting that his wife called him “brave” for placing the sign in front of the business.

Not long after, his social media feed lit up with criticism about the sign and he even received a few letters. But one such letter caught his attention. It was typed with no return address or signature.

To Medina, it was clear the letter came from a customer. They addressed him by name and accused him of caving in to political correctness, but they also called him “a leftist Marxist.

“Whoever wrote the letter said they only saw the sign after leaving the restaurant, spending more than $100 and leaving a “generous tip.”

The letter also has a handwritten part expressing disappointment La Carreta decided to display a sign “that insults and disrespects Christianity and America.”

That’s when Medina, who says he takes things in stride, posted it to social media.

On Facebook, he wrote that he was not upset or afraid. He said he stood by his sign and the letters only encourage him to keep going. “Si ladran es porque vamos avanzando,” he wrote, meaning “If they bark, it signifies we are advancing.” 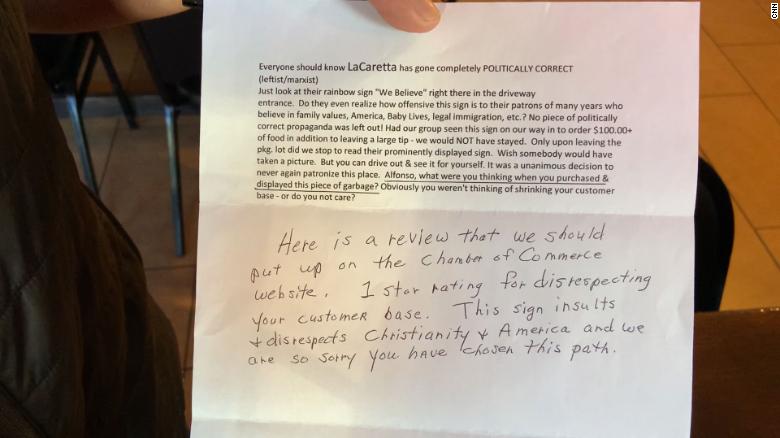 The anonymous letter a customer sent to La Carreta owner Alfonso Medina that led to the “No Love, No Tacos” slogan.

On Instagram, he wrote, “We’re sorry your burrito had to get political, but it was the only way y’all would listen.”

But it was the four words at the end of both posts that went viral: “No Love, No Tacos.”

And the phrase took off, becoming the new slogan of the restaurant.”

I am someone who takes something negative and tries to turn it into something 10 times more positive,” he said. “If they don’t want us, they should align their ideals and their comments with the food they eat.”

It didn’t take long for people to respond, even requesting T-shirts with the slogan.Maria Gonzalez, who calls herself La Carretta’s number one fan, applauds the restaurateur.”We live in a country where we should be united and think about our neighbors,” she said.

Medina did what any savvy businessman would do: He copyrighted the slogan and started selling T-shirts and other branded merchandise to help fund a scholarship for the local community college.

And he paid for a large billboard displaying “No Love, No Tacos” near his restaurant that dwarfs the sign that originally caused the controversy.

Medina didn’t stop there and decided to use the slogan to encourage people to vote in the upcoming election.

He is no stranger to politics, during the recent primary season, some Democratic hopefuls made a campaign stop at La Carreta, including Beto O’Rourke, Julian Castro and Tom Steyer.

He says he would welcome any Republican candidate whose values align with his own.

La Carreta is a busy place, the two cooks in the kitchen work acrobatics in the small space, carefully rushing tacos, nachos, enchiladas and other Mexican food specialties to their loyal customers.

On a recent Sunday in early October, tables were full within the restrictions imposed to maintain social distancing. Customers were almost all White. According to the Census Bureau, 30% of the town’s 26,666 residents are Hispanic.

La Carreta even gained national attention last year when The Food Network named its “California Burrito” one of the best in the United States. “It’s nothing really complicated,” Medina said of its basic ingredients like rice, beans and avocado plus a choice of beef, chicken or pork. Of course, you can also make it vegetarian.

Piggybacking on the popularity of the slogan, Medina created a new website where he is advocating to make Election Day a national holiday. He is practicing what he is preaching.

“My goal is to make the elections as just as possible,” Medina says. “I am going to close on Election Day, and not only pay my employees, but I am going to go and volunteer at the polls.”

The most expensive mole in Mexico is made with Chicatana ants