Marcelo Ebrard expressed his gratitude to the government of Alberto Fernández

Mexico and Argentina signed a commitment on Friday to create the Latin American and Caribbean Space Agency (ALCE).

In a virtual meeting headed by the foreign ministers of Mexico and Argentina, Marcelo Ebrard and Felipe Solá , in addition to the rector of the National Autonomous University of Mexico, Enrique Graue and Dolly Montoya Castaño, rector of the National University of Colombia and representative of the network of universities in Latin America, the Declaration on the Constitution of a Regional Mechanism for Cooperation in the Space Field was signed for the creation of the Regional Space Agency for Latin America and the Caribbean.

“We signed a commitment with Argentina to create the Latin American and Caribbean Space Agency (ALCE). Gratitude to Felipe Solá and the Government of Alberto Fernández as well as to all the members of CELAC. We are building the future today by developing our own technology. Good news!!” , said the head of the Ministry of Foreign Relations of Mexico, through his official Twitter account. 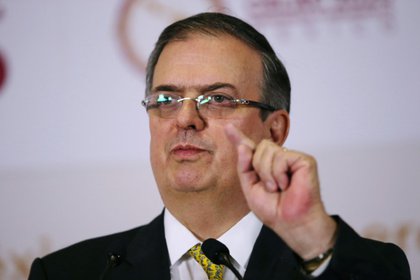 Ebrard thanked the member countries of the Community of Latin American and Caribbean States (CELAC) for their cooperation in the regional effort that will encourage space research.

“When we meet in January, it seems very far away, this year does not seem like a year, it seems like a decade because of everything we have lived through, who was going to tell us, in January, what we were going to experience in 2020”, said Ebrard during his intervention in the session.

“But, how good that we were able to reactivate the Community of Latin American and Caribbean States, because in the face of this emergency it has been shown that the path of cooperation between us is not only something desirable, but the most intelligent and practical in the short term for that we go well. And, if not, because there is the effort that Argentina and Mexico made, as proof of this, together, on the subject of vaccines and now this initiative that has to do with space, “he added.

“It is an achievement that we were not sure we could have due to the pandemic, so we are very happy. By carrying out this agreement, CELAC gives prestige and prestige to all its members, in addition to sending a favorable message to the investigation, ” the Argentine Foreign Minister had advanced.

ALCE will aim to strengthen the academic collaboration among members of the region and even unify work with other space agencies such as the European one.

“For Argentina, the space sector has been considered strategic for several decades, we understand it as an industry, in which our country has made great efforts, from the academic, technological, even business fields (….) our country has great expectations regarding the possibility of advancing in collaboration with the countries of the region … our region has a long history of collaboration ”, stated the Argentine Diego Hurtado, Secretary of Planning and Policies of Science, Technology and Innovation.

“We are going to show that we are going to do it, that we can have our own technological development that is increasingly effective. And, tomorrow we have, well, that step we had for the different positions, all of us who are here, let us remember this time, that today summons us, to say: ‘It was one of the best days in our public life, ‘” concluded Ebrard.